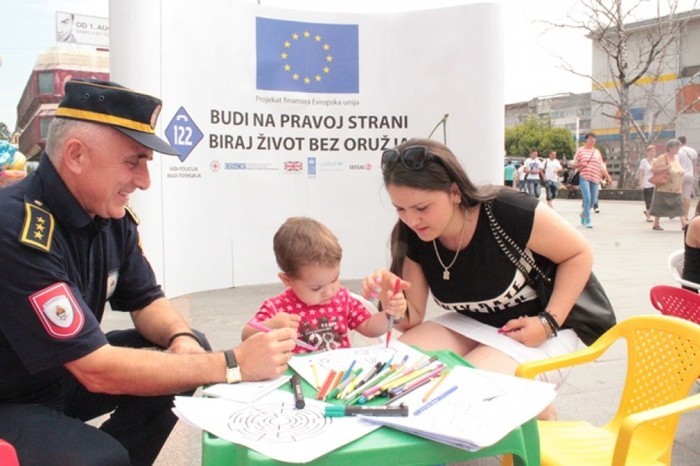 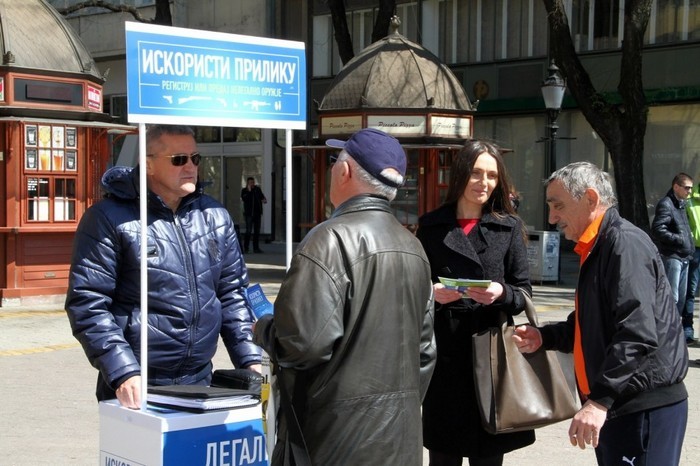 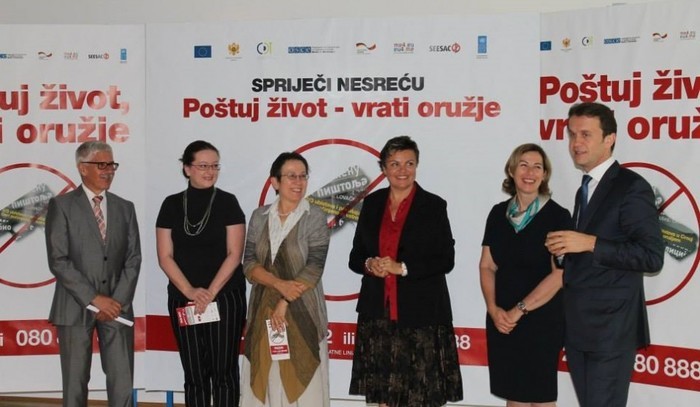 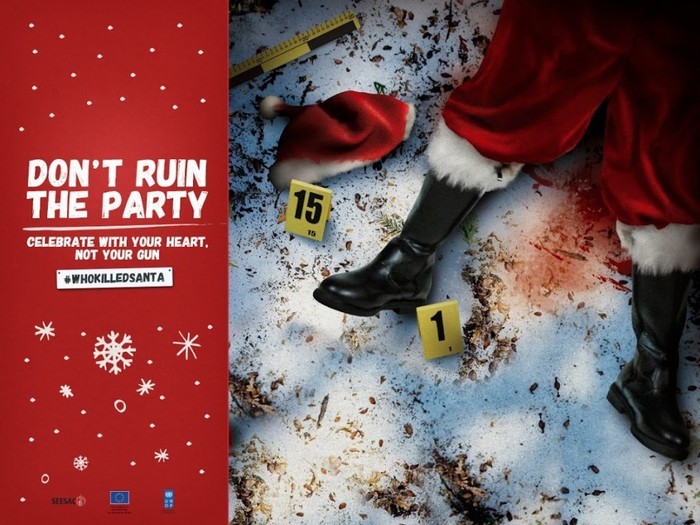 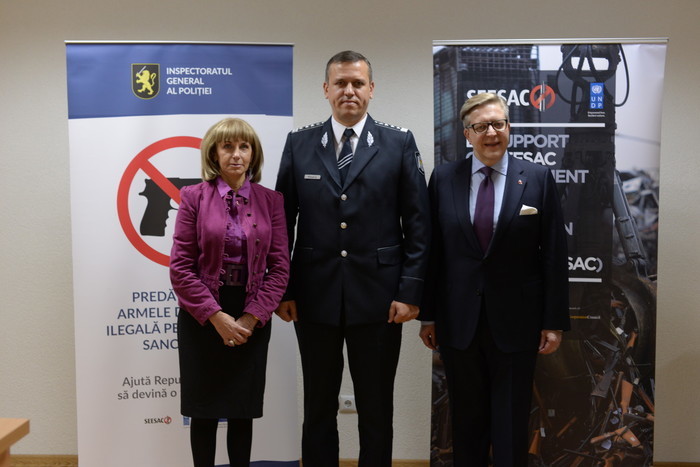 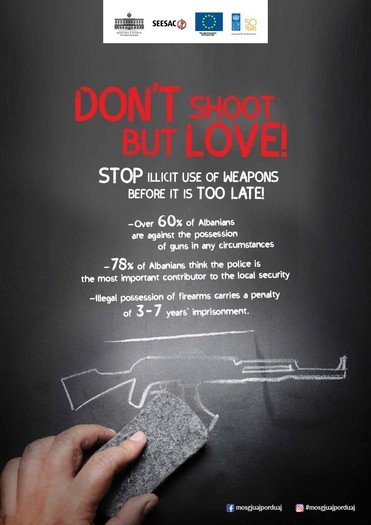 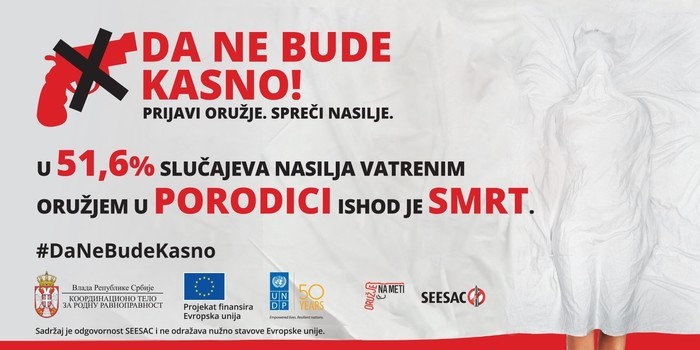 These activities built on the knowledge and experience gained from the previous collection and awareness raising campaigns SEESAC supported, and which led to the collection of 589 pieces of illicit automatic weapons, 16,368 pieces of illicit fragmentation weapons, 1,164 pieces of legal weapons, 818,153 pieces of ammunition and 620kg of explosive in Croatia and establishment of an online platform for the assessment of public perceptions in Serbia. (See SEESAC's previous work on SALW Collection and Awareness Raising)

The “Don’t Shoot but Love – Stop the Illicit use of Weapons before is too Late” campaign was launched on November 15 2016 to assist Albanian government in raising awareness on the danger of illegal possession and illegal use of firearms. It lasted until mid-December 2016. It was funded by the European Union and was implemented by the Ministry of Interior of Albania in partnership with SEESAC.

The campaign was informed by a public opinion survey conducted for SEESAC by IPSOS polling agency which showed that over 60% of Albanian citizens are opposed to firearms possession under any circumstance, and 78% believe that the police is the main contributor of security in the country.

The main objective of the campaign “Don’t Shoot but Love” was to increase public safety by raising awareness among citizens on the dangers of illegal possession and misuse of firearms. A specific focus was placed on raising awareness about firearms misuse in the context of domestic violence. The campaign will target both the public and law enforcement institutions.

The project supported the “Be on the Right Side – Choose Life without Weapons” campaign conducted during the one-year-long amnesty period which was in force through the country between 01/01/2014 and 31/12/2014, and which provided an opportunity for citizens to surrender weapons held illegally, without legal repercussions, as well as to register those weapons whose types are admissible by law.

The campaign is designed to interact with, as many citizens as possible throughout the country, via radio and television interviews, public space advocacy events, and one-on-one interaction.

The Ministry of the Interior of Montenegro, together with SEESAC, UNDP Montenegro, the Organization for Security and Cooperation in Europe (OSCE) in Montenegro, and the Center for Democratic Transition (CDT), launched an awareness raising campaign “Respect Life, Surrender Weapons” (Poštuj život, vrati oružje) on 24 June 2015.

The year-long campaign aimed to promote the ongoing SALW legalization and surrender of illicit weapons effort, as well as to inform the public of the risk associated with firearms in society. The campaign was supported by the European Union (EU), with funds secured through the EU Council Decision 2013/730/CFSP in support of SEESAC disarmament and arms control activities in South East Europe.

While the legalization period will end in March 2017, the amnesty for the surrender of illegally held weapons will last for the duration of the law.

From the beginning of the campaign to the end of 2015, 756 pcs of SALW, 138 pcs of mines and explosive devices, and 10,658 pieces of ammunition have been surrendered.

THE REPUBLIC OF MOLDOVA

The “Let’s Make Moldova Safer” campaign took place from 2 November until middle of December 2016, with funding from the European Union and implemented by Moldova’s General Police Inspectorate, together with UNDP SEESAC.

The aim of the campaign was to assist Moldovan law enforcement authorities in raising awareness on registration of firearms, surrender of illegal firearms and to reduce the demand and misuse of weapons by citizens.

The Ministry of Interior of the Republic of Serbia, supported by the European Union (EU) through SEESAC, organized a country-wide campaign "Iskoristi priliku" aimed at informing the citizens about the ongoing legalization, and calling on them to register or surrender any weapons that they might be holding illegally. The EU is supporting the implementation of the legalization campaign with the funds secured through the EU Council Decision 2013/730/CFSP in support of SEESAC disarmament and arms control activities in South East Europe.

Serbia passed the new Law on Weapons on 20 February 2015, which stipulates that the Minister of Interior can declare legalization at any time. Legalization means that citizens can surrender or register weapons which they have held illegally, without being asked about the origin of the weapons and without suffering legal consequences.

The three-month long legalization campaign began as soon as the law came into effect, on 4 March 2015 and lasted until 4 June 2015, with awarness raising activities taking place in some 30 Serbian towns and cities.

By the end of the campaign, on 4 June 2015, a total of 2,138 pcs of SALW, 1,107 pcs of explosive ordinances, and 160,434 pcs of ammunition were surrendered, while registration requests were submitted for 4,300 pcs of SALW. In total, 7,545 pieces of SALW and explosive devices were extracted from illegal flows in this short period.

In addition, the “Before it’s too late” campaign was launched, which was funded by the European Union and implemented by the Coordination Body for Gender Equality of the Government of Republic of Serbia, together with UNDP SEESAC, took place from 16 November until the middle of December 2016.

The campaign “Before it is too late” was aimed at increasing public and women’s safety by raising awareness of the dangers of misuse of firearms, especially in the context of domestic and intimate partner violence. “Women are five times more likely to be victims of firearms incidents than perpetrators and death was more prevalent among female victims – 44% as opposed to 34% for male victims”, UN Resident Coordinator and UNDP Resident Representative Ms. Irena Vojackova Sollorano highlighted during the launch “It requires a long-term commitment and a strong, synchronized social and institutional response”.

SEESAC organized a regional social media campaign about the dangers of celebratory shooting "Don't ruin the Party - Celebrate with your heart, not your gun", on Facebook, Instagram and via Google ads, from 20 December 2015 to 20 January 2015, using cartoons and animation, as well as newspaper articles and YouTube clips about serious incidents to raise awareness about the consequences of celebratory shooting in the region. All posts were shared in Albanian, BCMS, Macedonian, as well as English to keep SEESAC's international audience informed.

The campaign reached a total of 5.087.367 people in the region, while the number of times people viewed SEESAC's ads is 26.799.551. Reactions to the campaign were 60% in favor and 40 % were against celebratory shooting and people in Croatia and Montenegro had more positive reactions to the campaign than others. On Facebook, SEESAC's campaign reached the total of 1.647.909 people and had 219.274 video views, while on Instagram, posts in Albanian of Trumpet/Gun and Wedding had over 9000 and 3000 likes.