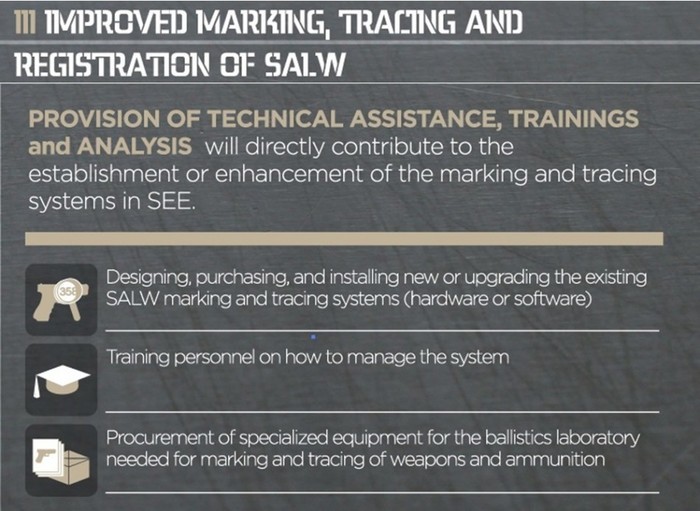 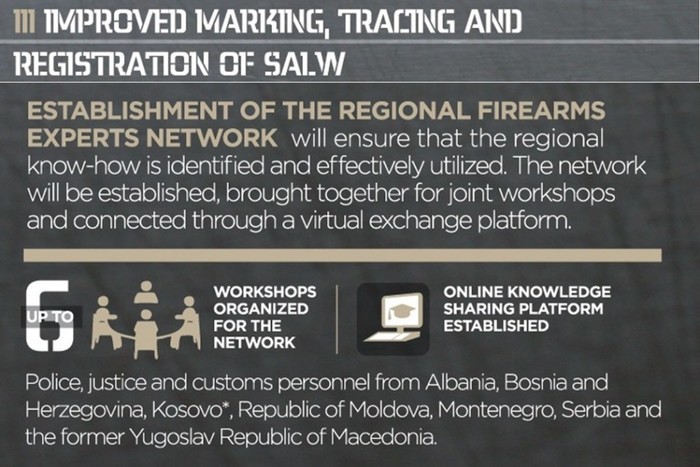 The third component of the EU Support of SEESAC Disarmament and Arms Control Activities in South East Europe (EUSAC) project aimed at further improving national and regional capacities for the marking, tracing, and record-keeping of small arms and light weapons (SALW), thus strengthening the rule of law in South East Europe (SEE).

The project's activities supported efforts to register, monitor, and measure the quantities of, as well as demand for, SALW. These activities focussed mostly on establishing and improving the capabilities of national authorities to keep records of legal weapons in civilian possession by supporting the enhancement and digitalization of such records, and through facilitating regional cooperation. In addition, support was provided to the forensics departments of the law enforcement authorities – support which will assist investigations and analyses in firearms-related investigations.

Activities are designed in line with, and will therefore enhance the implementation of, the UN Programme of Action, the International Tracing Instrument, the UN Firearms Protocol, the Council Directive 91/477/EEC, as well as the Common Position 2008/944/CFSP.

IMPROVEMENT OF MARKING AND TRACING SYSTEMS

The project supports the enhancement of capabilities for SALW marking, tracing, record-keeping, and investigating in South East Europe through a mixture of training and technical-level assistance, re-enforced by normative and institutional analyses. Activities included:

In order to facilitate knowledge and information exchange in the region, SEESAC has been mandated by the Council of the European Union to establish the South East Europe Firearms Expert Network (SEEFEN). SEEFEN is a holistic platform of professional practitioners consisting of 21 senior expert representatives of the Police Directorates, Customs Administrations, and the Public Prosecutors’ Offices in South East Europe. The process is administered under the auspices of, and in cooperation with, the Regional Cooperation Council.

Six Regional Meetings of SEEFEN were held from 2013 - 2016. For more information on these meetings, please see:

SEESAC, in its capacity as the SEEFEN Secretariat, coordinates and convenes SEEFEN meetings to facilitate the exchange of information and experience between the entities in the region, advance knowledge, and provide a platform for the coordination of actions and activities on both the bilateral and regional levels. Each meeting is also used to encourage stronger cooperation with the EU, its Member States, and specialized EU agencies such as EUROPOL, in addition to key international actors such as INTERPOL, the World Customs Organization, and other actors in the field of combatting the illicit proliferation of firearms.

One of the main activities of SEEFEN is the collection and analysis of existing legislation, statistical data, and practices of all jurisdictions relevant for combating the trafficking and misuse of SALW. Information and data collected through this process will provide an overview of the status quo as it relates to each of the SEEFEN members, which will be combined and cross-referenced in order to provide a regional baseline to build on in developing a regional threat assessment.

In order to provide a secure forum for open discussion as well as the exchange of various legal, technical, and practical information that could help the firearms experts in their daily work, SEESAC has established an online knowledge-sharing platform.

SEESAC developed a feasibility study mapping the legal and technical possibilities for closer and more institutionalized tracing and ballistics data-sharing among law enforcement institutions in the region. The study explores the possibility of linking the respective registration systems in the region, and it has been disseminated to key regional stakeholders.

Activities under the EUSAC 2013 - 2016 project were a continuation of previous activities during which SEESAC assisted SEE beneficiaries in implementing their legal and political commitments in the area of marking and tracing firearms. An overview of these efforts is available here.