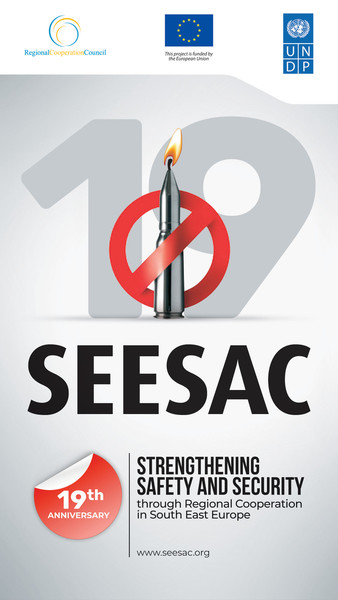 On 8 May 2021, the South Eastern and Eastern Europe Clearinghouse for the Control of Small Arms and Light Weapons (SEESAC) celebrated 19 years of continued action marked by unfaltering dedication to combating and reducing illicit arms flows and armed violence, and to advancing gender equality for a safer South East and East Europe (SEE).

From its onset in 2002, SEESAC’s role has been that of an executive arm of the Regional Implementation Plan to Combat the Proliferation and Impact of Small Arms and Light Weapons and that of a focal point for SALW-related activities in South East Europe. By 2009, the scope of our work grew to include the advancement of gender equality in the security sector reform, thus also contributing to the Women, Peace and Security agenda. More recently, our geographic area of responsibility expanded to include Belarus and Ukraine as well.

In the course of our work, SEESAC supported governments in developing a number of signature solutions rooted in strong partnerships, local ownership, and regional coordination, thus contributing to standardization of approaches and positioning the region among the global leaders in SALW control. Several of these solutions are now being replicated by other regions of the world, such as the Caribbean and the EU.

Through its engagement, SEESAC has been facilitating regional cooperation and supporting governments to create more effective, accountable, and inclusive security sectors, helping usher in significant gains for a #SaferRegion:

All of these results are cumulatively responsible for:

SEESAC is a joint initiative of the United Nations Development Programme and the Regional Cooperation Council. Its geographic area of responsibility includes Albania, Bosnia and Herzegovina, Montenegro, North Macedonia, Serbia, Kosovo*, Moldova, as well as Belarus and Ukraine, and is supported by the European Union, Germany, United States of America, Norway, Slovakia, United Kingdom, Netherlands, Sweden and France.

SEESAC directly contributes to the achievement of UN Sustainable Development Goals #16 and #5, striving to Promote peaceful and inclusive societies for sustainable development, provide access to justice for all and build effective, accountable and inclusive institutions at all levels, and to Achieve gender equality and empower all women and girls, respectively.