The Roadmap is a testimony of the consensus reached among all stakeholders in the Western Balkans about the current challenges, the overall targets to be reached and the timeline of actions to be taken. It provides an overall platform for the achievement of commonly agreed on key performance indicators (KPIs) at strategic, policy and operational level.

The Western Balkans authorities have agreed to measure the progress of the Roadmap’s implementation through concrete and measurable indicators. 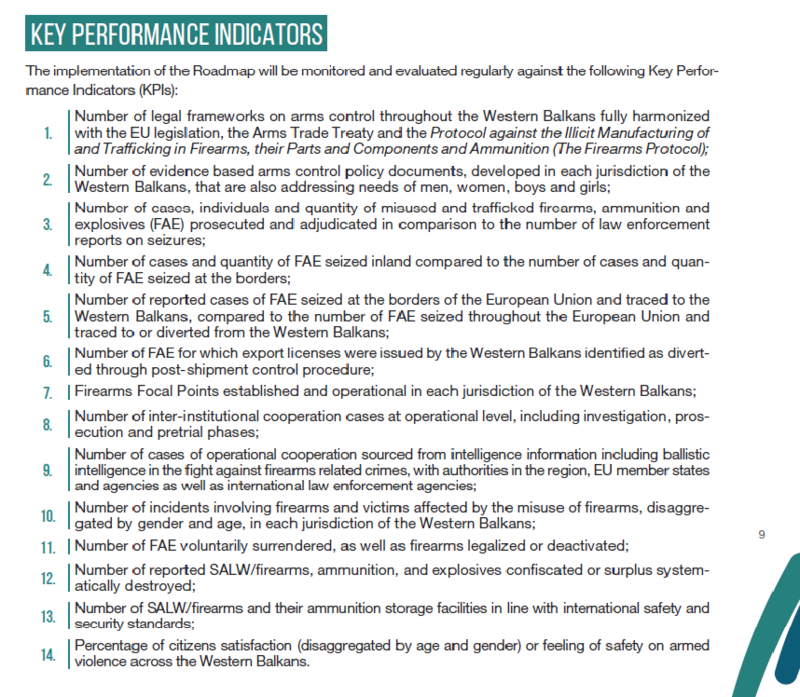 The periodic monitoring of progress against the jointly agreed KPIs and coordination of the implementation of the Roadmap by six beneficiaries is conducted by SEESAC with funding provided by the European Union through its Council Decision (CFSP) 2018/1788 of 19 November 2018 in support of the South-Eastern and Eastern Europe Clearinghouse for the Control of Small Arms and Light Weapons (SEESAC) for the implementation of the Regional Roadmap on combating illicit arms trafficking in the Western Balkans.

To this purpose, SEESAC in cooperation with the SALW Commissions in the Western Balkans has established in 2018 a regional monitoring framework, which follows the Key Performance Indicators and the Roadmap Goals. The first progress reports produced by the authorities covered period 1 January-31 December 2018, to be used as baseline information for measuring of progress throughout the roadmap timeline.