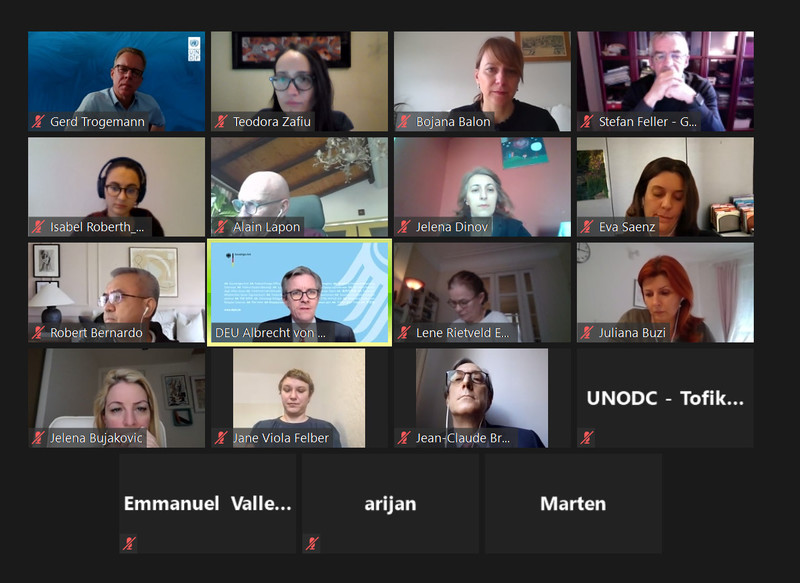 The annual Steering Committee meeting of the Western Balkans Small Arms and Light Weapons (SALW) Control Roadmap Multi-Partner Trust Fund (MPTF) took place on 28 January 2021, bringing together donors and implementing organizations with the aim of reviewing the progress achieved in 2020 and the plans for 2021.

The Steering Committee is the Trust Fund’s decision-making body, comprised of representatives of Germany, France, the United Kingdom, the Netherlands, Sweden, and the European Union, as well of the United Nations Development Programme (UNDP) and the United Nations Office on Drugs and Crime (UNODC), as the Trust Fund Implementing Organizations. The MPTF Office is also represented in the Steering Committee, as an observer, without voting rights.

The meeting showed that despite the COVID-19 pandemic, which affected the projects under implementation and forced them to readjust or delay activities, significant results were still achieved. These include strengthened capacities for tackling illicit trade of firearms by the Customs Authority and postal agencies in Bosnia and Herzegovina, improved investigative capacities of illicit firearms in the Kosovo* Police, and better understanding between the gaps of the criminal and procedural law and the UN Firearm Protocol in several jurisdictions in the Western Balkans.

About the Trust Fund

The Western Balkans SALW Control Roadmap MPTF was established by UNDP and UNODC and the MPTF Office as a key funding mechanism for the implementation of the Roadmap. It enables a platform to strengthen coordination, planning and communication among the donors, implementing partners and national authorities, and develop synergies among different players involved in this programmatic area. It also reduces risks to governments and financial contributors through a comprehensive risk and results-based management system.

The Trust Fund supports projects implemented in the area of SALW control that contribute to the achievement of the Roadmap goals and are in line with the priorities of the targeted jurisdictions. Projects can be implemented by the UNDP Offices in Albania, Bosnia and Herzegovina, Kosovo*, Montenegro, North Macedonia and Serbia, and by UNODC.