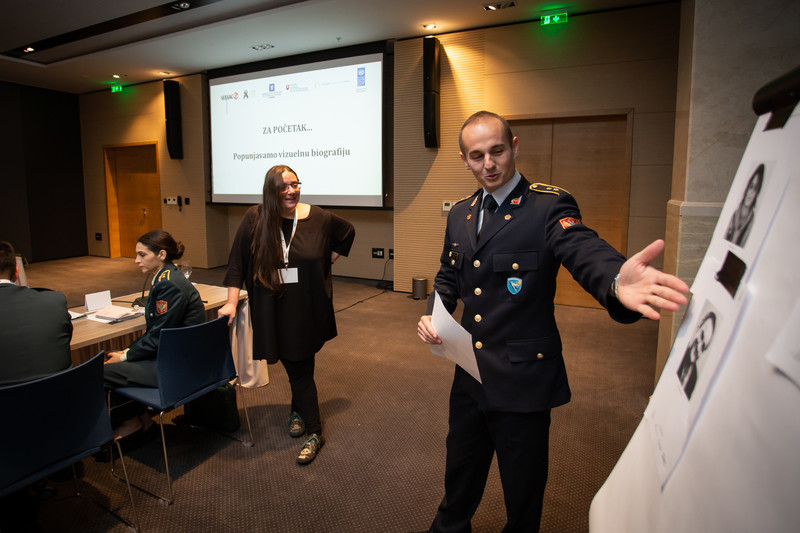 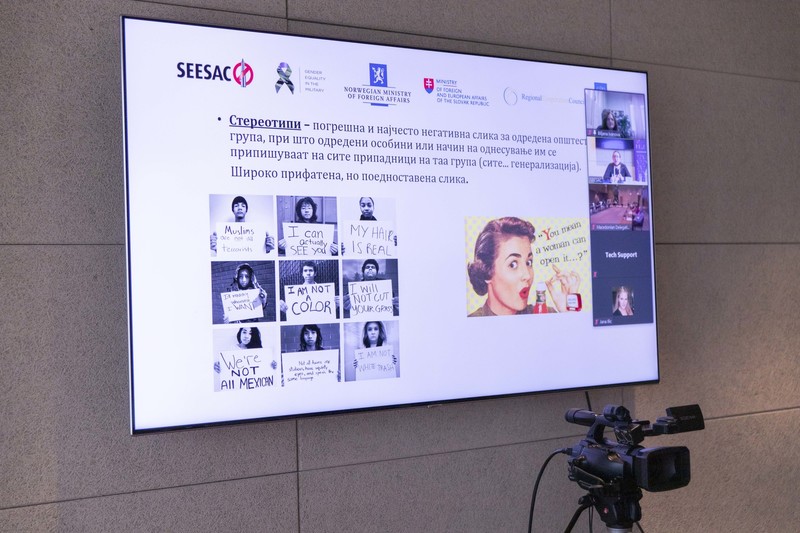 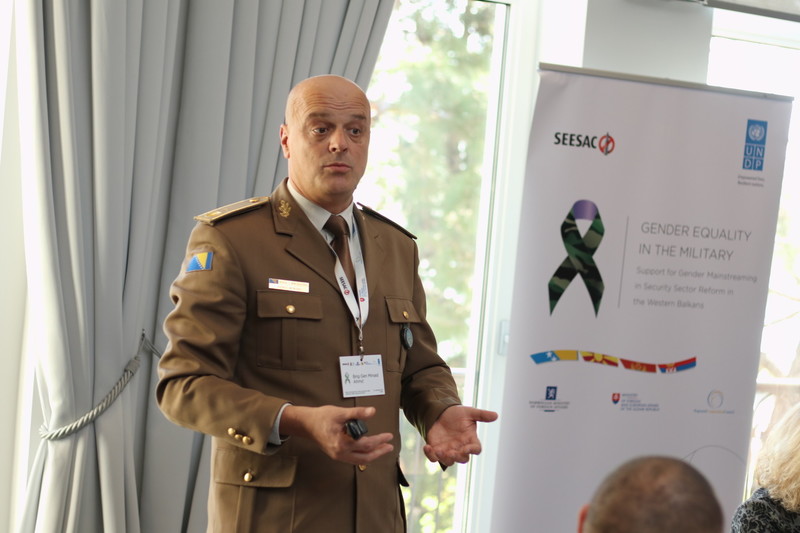 In the year of the 20th anniversary of UNSCR 1325 ‘Women, Peace and Security’ (WPS) the Ministries of Defence in the Western Balkans with the support of UNDP SEESAC continued the regional cooperation with strong focus on WPS Agenda. Our partners from the Ministries of Defence (MoDs) and Armed forces (AFs) from Bosnia and Herzegovina, Montenegro, North Macedonia and Serbia kept steady on their course towards gender equality and strengthening integration of the gender perspective in security sector polices and practices.

The main highlights in 2020

As part of the regional cooperation through the regional platforms supported by SEESAC, two online regional meetings were organized, facilitating exchange of information and knowledge related to integrating gender perspective into various aspects of the military practice: the 12th Regional Meeting of the Gender Equality Mechanisms (GEMs) and the 5th meeting of the Regional Network of Gender Military Trainers contributed to strengthened regional cooperation and increased capacities of MoDs and AFs for developing practical solutions in achieving gender equality.

The four MoDs with SEESAC’s support focused on combating gender-based discrimination, through exchange of information and data collection, that resulted with developing the regional Manual for Combating Gender Based Discrimination, Sexual Harassment and Abuse. This important joint knowledge tool is aimed to help practitioners as well as the general workforce in the military to recognize, address, process and, most importantly, reduce gender-based discrimination in the military. While the regional manual is yet to be widely distributed, the first results in increasing awareness related to this important topic are already tangible because representatives of the MoDs participated actively in drafting and commenting the regional manual, thus gaining knowledge and confidence to address gender based discrimination within their own systems.

Cross-regional data collection for evidence-based policies resulted with the second regional study on The Position of Women in the Armed Forces in the Western Balkans. An updated set of data, on the number and position women hold in the AFs as well as the working environment in the AFs in four countries of the WB provides an opportunity for assessing progress towards gender equality compared to the data from 2014, when the first such study was completed. The representatives of MoDs participated in data collection, which represented capacity building exercise in its own right.

Both knowledge products the regional Manual for Combating Gender Based Discrimination, Sexual Harassment and Abuse; and the regional study The Position of Women in the Armed Forces in the Western Balkans are being finalized currently and will be published in the first half of 2021.

In addition to the regional research, at the national level, MoDs expressed the need to deep dive in the methods for evidence based and gender responsive human resources (HR) policies. To that end, four tailor-made online training courses on data analysis and report writing were organized for the members of HR Department of the MoD of Montenegro. This resulted with building the capacities of the relevant employees to collect and analyze HR related data with the aim to better understand job satisfaction of employees in order to attract and retain more gender balanced workforce in the military.

Based on the request from the MoD of North Macedonia, capacity building seminar for mediators, focusing on the prevention of gender-based discrimination, sexual harassment and abuse, the internal complaints mechanism in the MoD and AFs, was organized in December 2020. The result of the seminar is the increased awareness of the mediators with a positive knock-on effect on their ability to address gender-related complaints.

A series of seminars for the Persons of Trust of the MoD of Serbia were organized in first half of 2020, with the aim to further strengthen the capacities of the internal complaint mechanism to effectively prevent and respond to gender based discrimination and harassment. The learning by doing approach was used based on a review of reported cases of discrimination in the MoD of Serbia. This resulted with a greater clarity on the role of the persons of trust and their increased ability to recognize and address gender-based discrimination.

In addition to various group-level capacity building activities that resulted with new regional and national knowledge products as well as new knowledge and skills gained by people working in the military sector in four participating jurisdictions, SEESAC facilitated Gender Coach Programme, tailored to the needs of top-level commanding officers. This resulted with two rounds of individual coaching support completed with the high-level officers from MoDs in Bosnia and Herzegovina and Montenegro.

Highlights from knowledge sharing activities beyond the Western Balkans

The knowledge and experience on integrating gender into the security sector reform in the Western Balkans was shared with other regions through the global Gender Equality Network for Small Arms Control (GENSAC), launched by the  German Federal Foreign Office in 2020 as part of the efforts to promote greater and more active inclusion of women in policy decision making, as well as improved gender-responsive measures to protect women and men from the misuse of firearms.

As part of the South-South knowledge exchange the gender military trainers form the Western Balkans trained their peers in the National Army in Chisinau, Moldova.

Finally, the practical examples and best practices on integrating gender in the AFs in the Western Balkans were shared with the South East Europe Military Intelligence Chiefs at the two-day basic gender awareness seminar delivered by SEESAC, which had a multiplier effect through sensitising high level officials within the military intelligence.

In 2021, SEESAC will continue to support the Ministries of Defence and the Armed Forces, through the project Strengthening of Regional Cooperation on Gender Mainstreaming in Security Sector Reform in the Western Balkans,in line with MoDs needs and priorities.

The Strengthening of Regional Cooperation on Gender Mainstreaming in Security Sector Reform in the Western Balkans project is financed by the governments of Norway and the Slovak Republic. With the support of UNDP SEESAC, the project provides the Ministries of Defence and Armed Forces in the Western Balkans with a platform where, they can exchange ideas and develop policies to ensure long-term and sustainable inclusion of the gender perspective in defence policies and practices.