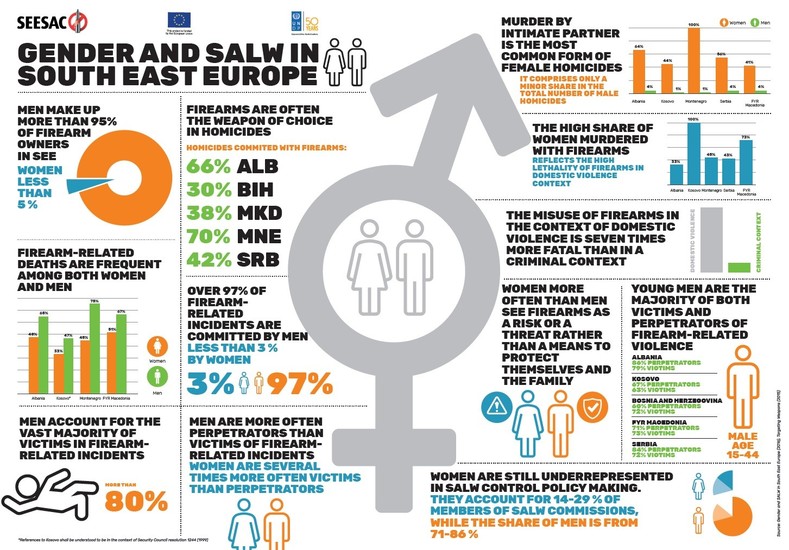 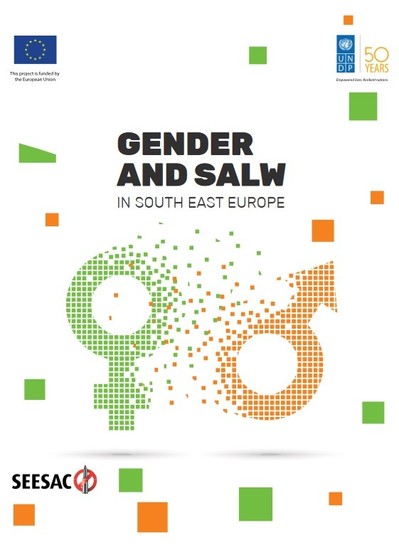 The proliferation, use and impact of SALW display evident gender dimensions. A growing body of research has significantly contributed to the increased visibility of linkages between gender and SALW, clearly demonstrating that the use, misuse and effects of SALW are heavily gendered and have differentiated impacts on women and men.

As in other regions, in SEE the gender perspective plays an important role in shaping and understanding various aspects of SALW, such as:

Men make up an overwhelming majority of firearm owners – 98 per cent in Montenegro, more than 99 per cent in Albania, 95 per cent in Serbia, 96 per cent in Moldova, 97 per cent in Bosnia and Herzegovina. Men dominate professions with easy access to firearms (police, military, private security companies) and firearm-related activities, such as hunting.

While men are more often at risk of firearm misuse by their non-intimate acquaintances or persons they may not know, women are more at risk in a domestic context, from their intimate partners. Murder by intimate partner is the most common form of female homicide in SEE (ranging between 41 per cent and 100 per cent), while it comprises only a minor share in the total number of male homicides. The high number of women murdered with firearms (from 33% to 100%) reflects the high lethality of firearms in the context of domestic violence.

Possession, use and misuse, small arms are closely linked with specific expressions of masculinity in society, i.e. certain roles, practices and expectations attributed to men which encourage risk-taking behavior among them.

Women and men often have different attitudes to SALW. Women are more likely to see the presence of a firearms as a threat to their own and their families’ security. Women and women’s organizations play a vital role in advocating for stricter SALW regulations.

Women are still underrepresented in SALW control policy making. They account for 14-29 per cent of members of SALW commissions, while the share of men is between 76 and 86 per cent. Underrepresentation of women hinders the articulation of diverse perspectives and affects policy outcomes.

How is gender treated in SALW control legislative and policy frameworks in SEE?

A study released by SEESAC in 2016 shows that:

1. Despite the highly gendered dimensions of SALW, the gender perspective is not addressed by or integrated into policies regulating SALW control in SEE.

2. If attempts are made to address gender aspects of SALW, they are being tackled in a fragmented way and/or gender blind manner, primarily in the field of domestic violence and through the regulation of civilian possession.

3. Indicators showing gender differences about the ownership, use and misuse of firearms, differentiated effects of firearms on women and men, as well as mechanisms in which gender roles shape dominant SALW practices in SEE, are not being addressed.

4. The lack of gender disaggregated data or comprehensive research on linkages between gender and SALW, represent a hindering factor for the development of gender-responsive SALW control policies.

5. Some steps have been taken to incorporate the gender perspective into the SALW control policy response, although still in the very initial stage. For example, efforts have been devoted to promoting women’s participation (civil society groups) in the development and implementation of policies and involving gender equality mechanisms in establishing a strategic framework. In addition, attempts have been made to consider the differentiated impact of SALW on women in the research design, as well as to have measures in place to ensure balanced inclusion of female and male personnel in SALW-related training.

What do we gain from integrating the gender perspective in SALW frameworks?

Integrating the gender perspective into SALW control means using gender disaggregated data to recognize and respond to gender-specific risks women and men face with respect to SALW. This information adds a dimension to the understanding of the problem which significantly affects the efficiency of interventions, but usually goes unnoticed. Integrating gender into all cycles of SALW control and management increases the understanding of the complexity of the problem and, therefore, enables the creation of more adequate and effective SALW control policies better suited to the challenge at hand. The aim is a more secure society that is equally safe for both women and men. This can only be achieved if the different needs of women and men are considered.

SEESAC’s publications are available in regional languages under Publications.

The tool is available in regional languages under Publications.