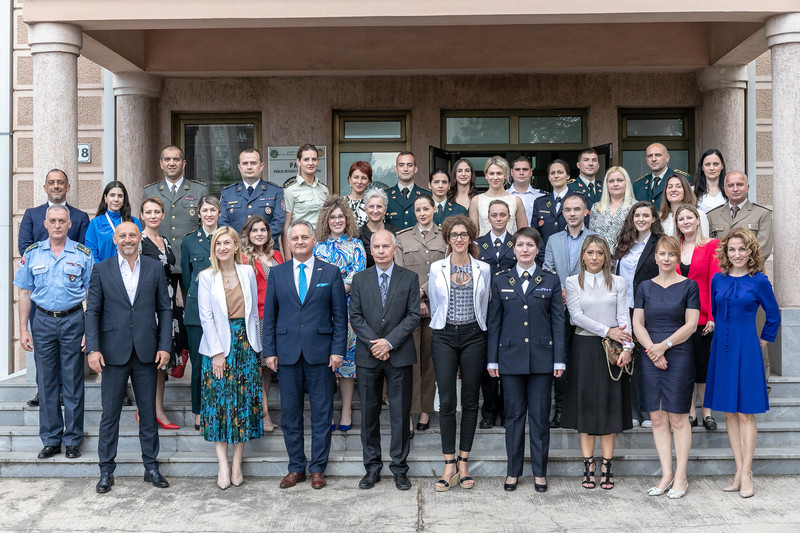 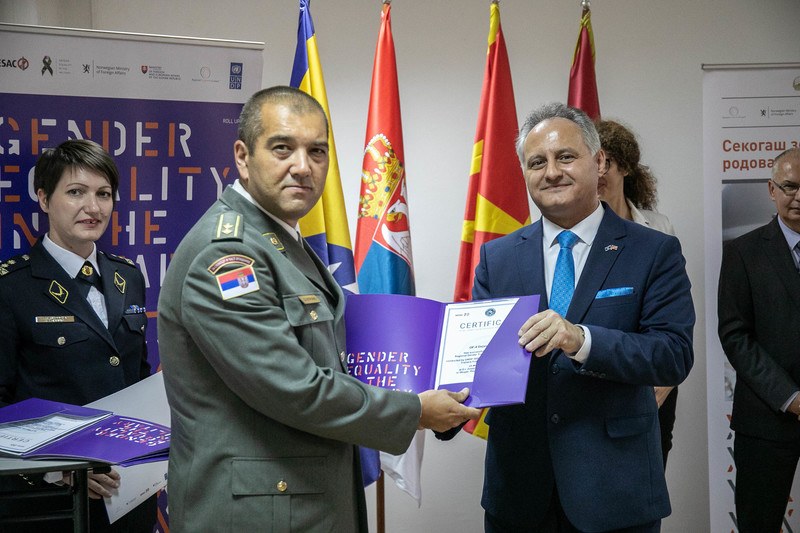 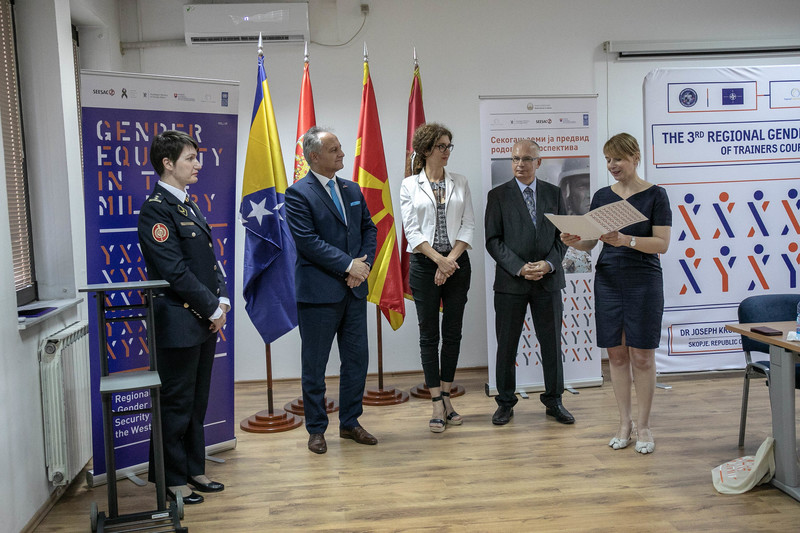 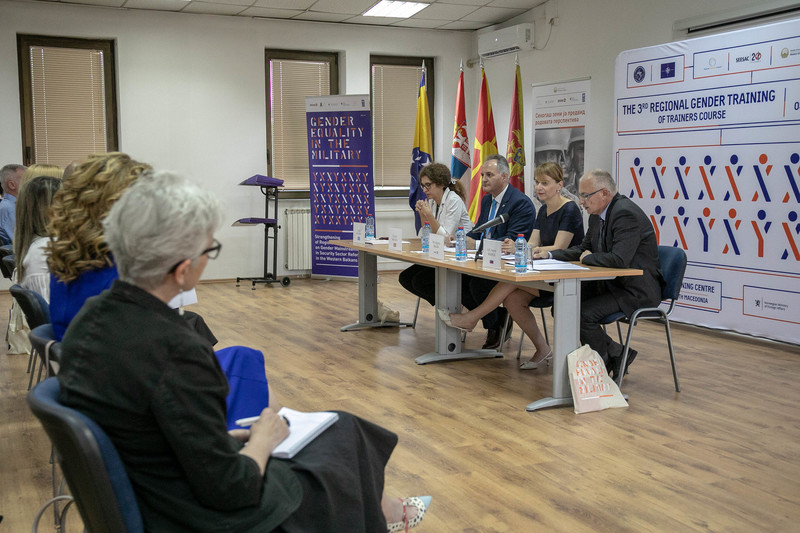 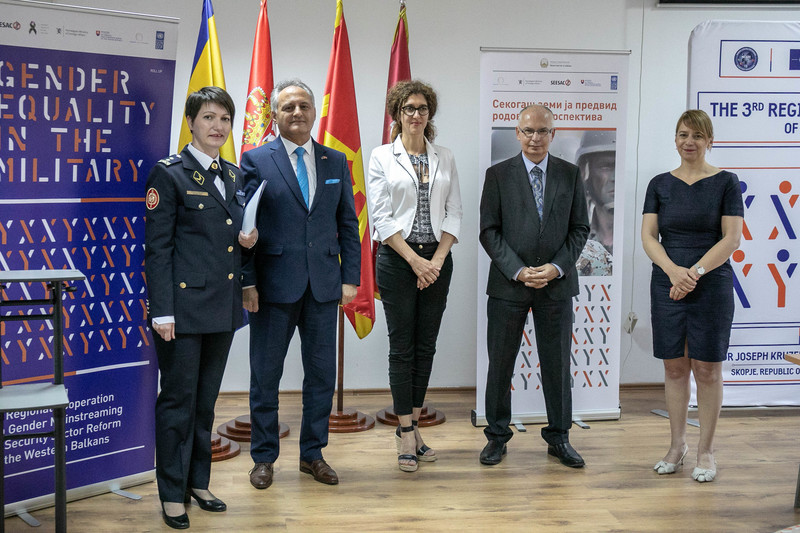 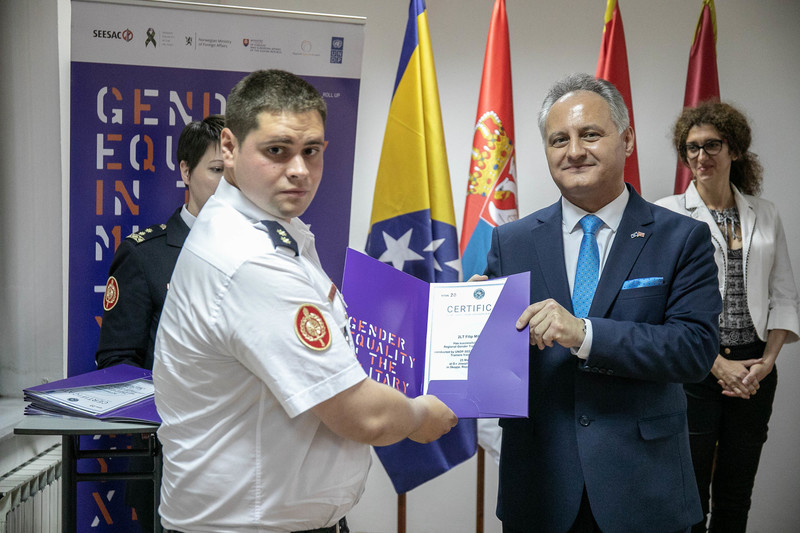 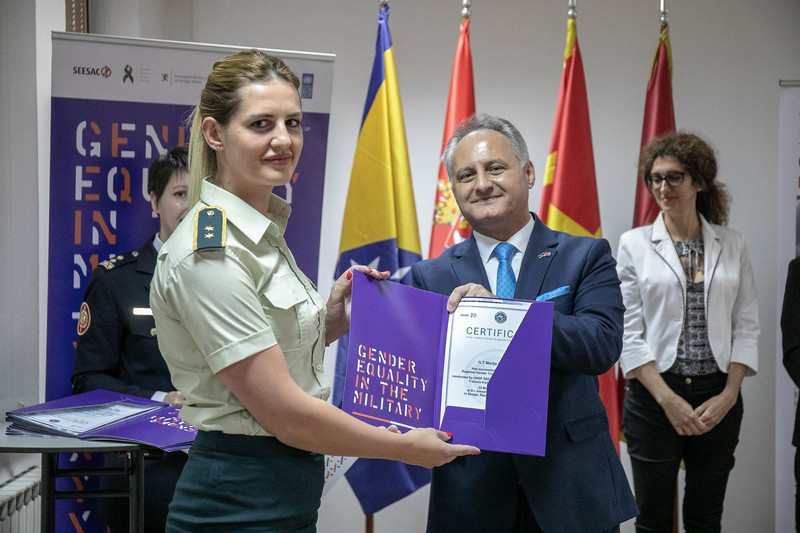 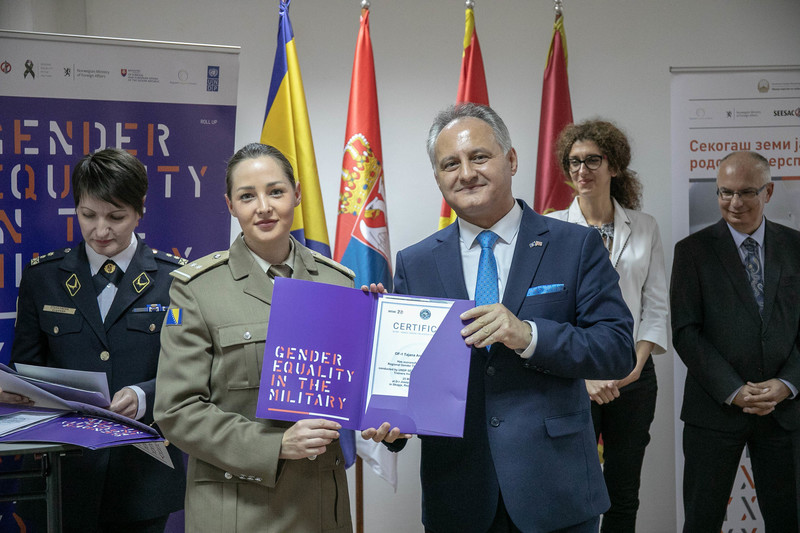 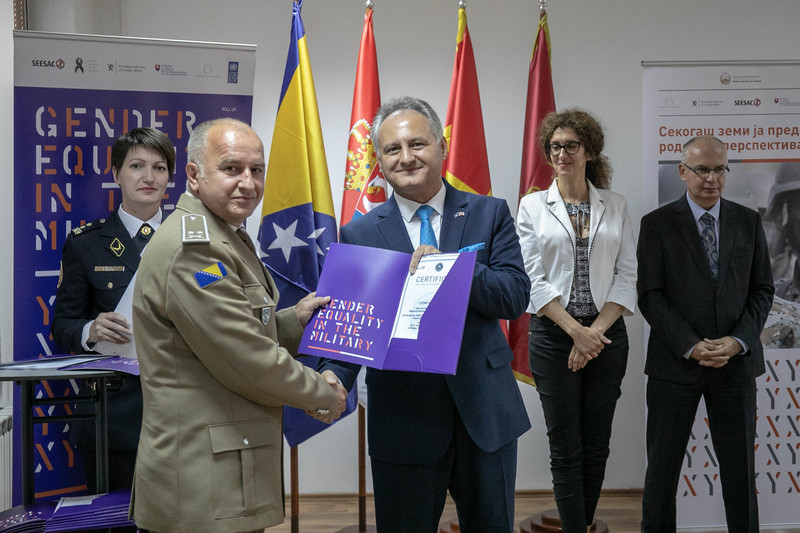 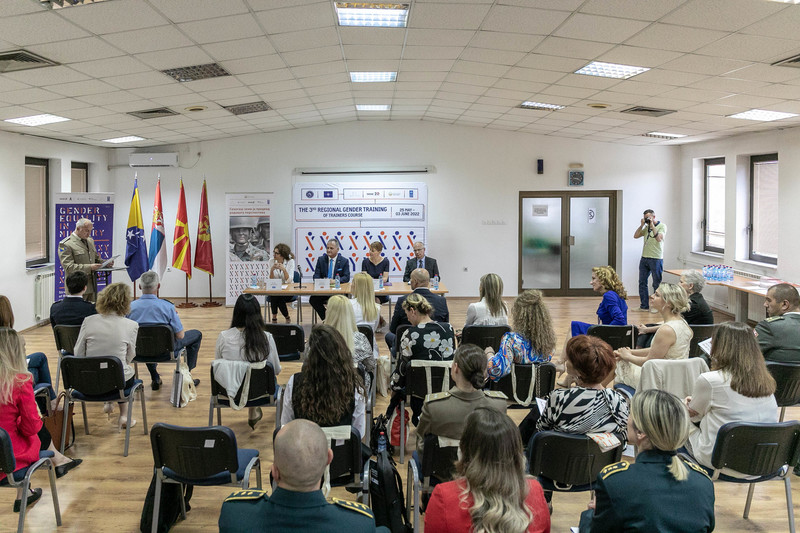 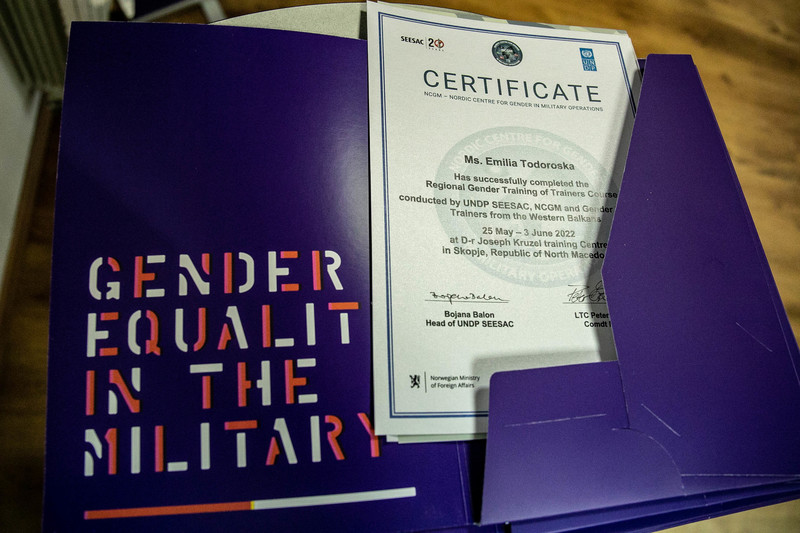 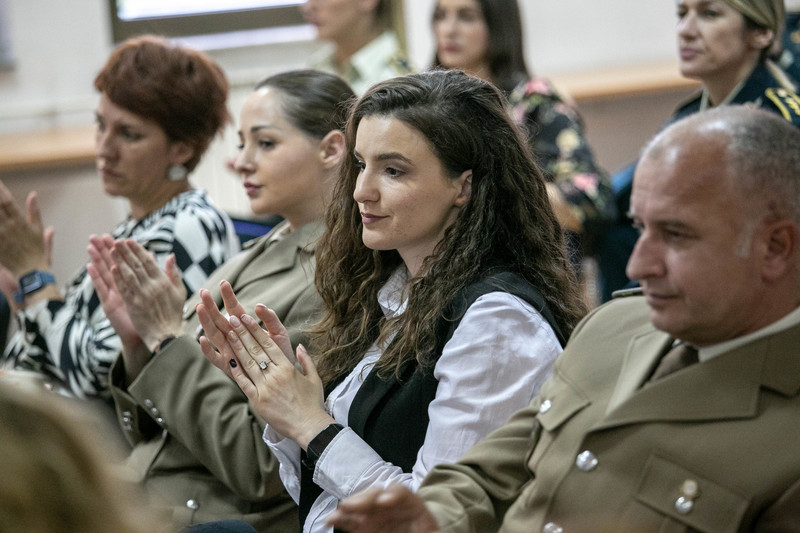 The third generation of gender trainers from the Ministries of Defence (MoDs) and Armed Forces (AFs) of Bosnia and Herzegovina, Montenegro, the Republic of North Macedonia, and the Republic of Serbia completed the third Regional Gender Training of Trainers Course  (GToT). Seventeen new gender trainers were awarded certificates at the closing ceremony on 2 June 2022 at the Public Affairs Regional Center (PARC), Skopje, North Macedonia.

The closing ceremony was opened by Mr. Dragan Nikolic, State Secretary of the MoD of North Macedonia, H.E. Ambassador Henrik Markus, the Embassy of the Slovak Republic, and Ms. Sanja Bojanic, Deputy Resident Representative, UNDP North Macedonia. Ambassadors of Bosnia and Herzegovina, Montenegro, and Serbia were guests at the ceremony. The closing ceremony was moderated by Ms. Bojana Balon, Head of SEESAC.

Mr. Dragan Nikolic, State Secretary of the MoD of North Macedonia, highlighted the importance of the third Regional Gender Training of Trainers Course in contributing significantly to the successful implementation of the Regional Project Strengthening Regional Cooperation to Incorporate a Gender Perspective into Security Sector Reform (SSR) in the Western Balkans, as well as in achieving Goals 5 and 16 of the UN Agenda 2030 for sustainable development and implementing UN Security Council Resolution 1325 -Women, Peace, and Security. Mr. Dragan Nikolic pointed out that the two-week training course demonstrated that all four countries are committed and working together to set new standards in tackling gender stereotypes, prejudices, and barriers to women’s full participation in the AFs. Mr. Nikolic complimented all certified training participants, inviting them “to set an example in planning, conducting and evaluating gender training in their functional area with full commitment and sharing the acquired knowledge and experience”.

H.E. Ambassador Henrik Markus, the Embassy of the Slovak Republic in Skopje, underlined the importance of a regional perspective in the SSR implementation and policymaking, including the UNDP SEESAC’s role in enabling information sharing, and knowledge exchange on how to integrate gender into defence policy, military practice, and networking. He commended the successful organization of the Ministerial Conference in December 2021, which resulted in the signing of the joint Ministerial Declaration on Support for Gender Equality in Security Sector Reform in the Western Balkans. The Ambassador reaffirmed Slovakia’s commitment to supporting the strengthening of gender equality mechanisms, mainstreaming gender in military education, and designing gender-sensitive human resource policies for the MoDs and AFs in the Western Balkans.

Ms. Sanja Bojanic, Deputy Resident Representative, UNDP North Macedonia, stressed the UNDP and SEESAC’s efforts to integrate the gender perspective with UNSCR 1325 through information sharing and knowledge exchange in the Western Balkans, as well as globally, to promote gender equality and empowerment of women. Ms. Bojanic congratulated the third generation of gender trainers. She commended the MoDs and AFs of the Western Balkans for participating in the Gender Training of Trainers and their efforts in integrating the gender perspective into defence policies and practice.

Ms. Bojana Balon, Head of UNDP SEESAC, praised the valuable long-term partnership of UNDP SEESAC, the Nordic Center for Gender in the Military, and the MoDs and AFs in the Western Balkans and highlighted the importance of cooperation through a regional platform for gender equality in the military. Ms. Balon emphasized the significance of the Regional Network of Gender Military Trainers as instrumental in raising gender awareness among military personnel in the Western Balkans and reiterated the dedication of the UNDP SEESAC to supporting further capacity building of gender military trainers. Ms. Balon thanked the MoD of North Macedonia for co-hosting the third GToT meeting and commended the excellent collaboration and continuous efforts of the MoDs in integrating the gender perspective into defence policies and practices.

The course is organized by UNDP SEESAC and the Nordic Centre for Gender in Military Operations. It is specifically tailored to the needs of the MoDs and AFs in Bosnia and Herzegovina, Montenegro, Serbia, and North Macedonia and delivered by military instructors from these institutions, with the main goal of strengthening the Regional Network of Gender Military Trainers.

This activity is organized within the scope of the UNDP SEESAC’s second phase of the Strengthening of Regional Cooperation on Gender Mainstreaming in Security Sector Reform in the Western Balkans project, which provides support for mainstreaming gender in the security sector reform, in line with the UN Sustainable Development Agenda 2030 and United Nations Security Council Resolution 1325 on Women, Peace, and Security.