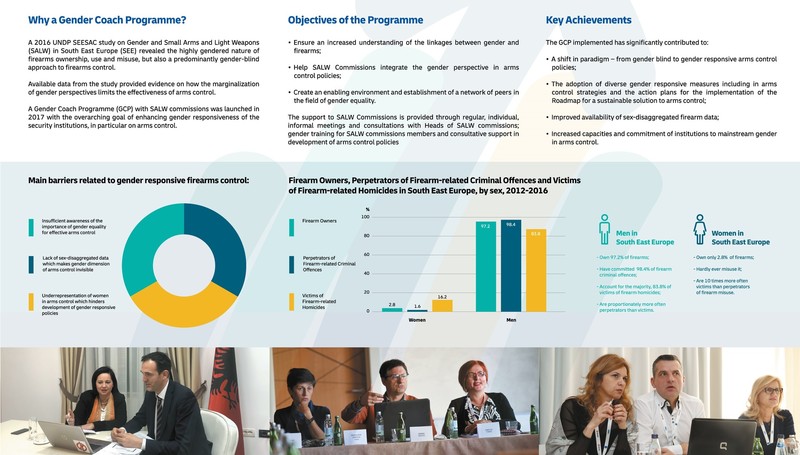 The new unit on Gender and Disarmament is a part of comprehensive EU Non-Proliferation and Disarmament Consortium eLearning course which addresses a wide range of issues including arms control theory, weapons of mass destruction and conventional weapons to humanitarian arms control and emerging technologies.

Recently launched unit on gender and disarmament provides detailed insights into historical background and key terminology,  UN Framework and relevant treaties, conventions and action plans containing gender references. In addition, it provides overview of ongoing initiatives relevant for the integration of the gender perspective in disarmament.  The Unit also features UNDP SEESAC’s experience in the implementation of the Gender Coach Programme in the context of small arms control in South East Europe.

The Gender Coach Programme (GCP) is an innovative approach to boosting the gender-responsiveness of security sector institutions by developing competencies and fostering commitment of the senior management. The Programme was developed and first implemented in Sweden in 2007 within the context of the implementation of UNSCR 1325[1].

The GCP aims to increase competences and skills of the senior management in security sector institutions to mainstream gender in their work.  In doing so, it enables participants to encourage change in their institution and become leaders in integrating the gender perspective into their operations.

In 2015, UNDP SEESAC piloted the GCP as part of the project Strengthening of Regional Cooperation on Gender Mainstreaming in Security Sector Reform in the Western Balkans in cooperation with the Ministry of Defence of Montenegro. An officer of the Armed Forces of Montenegro (AFM) - Head of the Human Resources Sector of the Human Resources Department of General Staff participated in the programme.

By building on this experience, the GCP was initiated in 2017  to strengthen the capacities of heads of Small Arms and Light Weapons (SALW) Commissions in Montenegro, Bosnia and Herzegovina and Albania to integrate the gender perspective into SALW control policymaking. In 2019, the programme has been further expanded to support the General Inspector of the MoD in Bosnia and Herzegovina and Director of Human Resources Directorate in the MoD of Montenegro.

The GCP is based on individual work between a representative of a relevant institution and the coach, and it includes regular, individual, informal meetings and consultations. During these informal learning sessions, a wide range of topics is discussed, including basic gender concepts, stereotypes, prejudices and gender-based discrimination, violence against women, the role of men in advancing gender equality etc. The bespoke learning programme is tailored to meet the needs of each individual participant. With the coach’s support, the participant develops an individual action plan that aims to advance gender equality in their specific work by implementing concrete activity.

The GCP also includes gender training for SALW Commission to foster the establishment of the institutional environment for the promotion of gender equality.

The implementation of the GCP in South East Europe has demonstrated its transformative potential. Participants initiated a wide range of gender-related activities, such as developing an activity plan for raising gender awareness in the armed forces, facilitating the integration of gender-responsive measures in SALW control strategies, or initiating the cooperation with women’s organizations and gender equality agencies.

SEESAC’s Gender Coach Programme has also recently been featured as an example of best practice in the OSCE research Increasing and Supporting the Participation of Women at all Levels in the Montenegrin Police.

[1] For a detailed overview of the Gender Coach Programme and its implementation in Sweden, please see Dr Louise Olsson and Capt. Anna Björsson, Gender Training for Leaders: The Swedish Gender Coach Program.  Georgetown Institute for Women, Peace and Security Washington, 2017