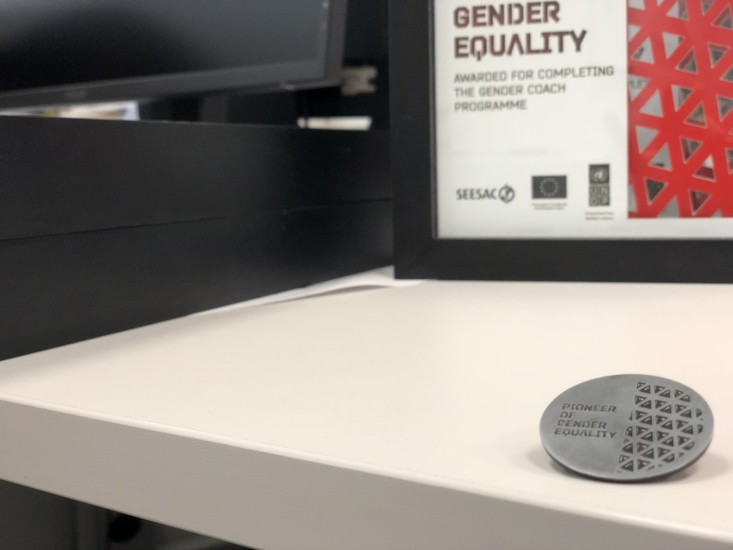 During the SALW Commissions Meeting 10, Ermin  Pešto and Mladen Marković - leaders of arms control in Bosnian and Herzegovina and Montenegro were awarded the title of “Pioneers of gender equality” for completing the Gender Coach Programme.

In little other areas the linkage is so clear and the policy response as scarce as it between gender equality and arms control. Bosnia and Herzegovina and Montenegro decided to step up their game and offer all their citizens the protection they need.

In 2017 Ermin Pešto, Assistant Minister, Ministry of Security of Bosnia and Herzegovina and Mladen Marković, President of the National SALW Commission, Ministry of Interior of Montenegro embarked on a gender equality journey. During these 12 months, the two decision-makers discussed during one-on-one sessions with Dragan Bozanic – who leads SEESAC`s work on Gender and SALW topics that range from the way gender shapes specific risks that women and men face, gender analysis, sex disaggregated data and risks related to dominant forms of masculinity. The aim of the programme is to boost the gender-responsiveness of institutions by developing competences and fostering commitment among the senior management.

One of the key learnings for me from this programme was answering the question: what does it mean integrating the gender perspective in arms control policies? I learnt that we need to move beyond quotas and apply sex and age-disaggregated data to identify the gender-specific risks men and women face and how to reach to those risks.

Mladen Marković, President of the National SALW Commission, Ministry of Interior of Montenegro:

Beyond understanding how important it is to have policies that address the needs of both women and men, the Gender Coach Programme offered me the space to ask all the questions I had regarding gender equality and receive practical, knowledge-based answers.

The achievements of the Gender Coach Programme go beyond the one-on-one sessions on gender equality and include:

The Gender Coach Programme was implemented in Sweden in 2007 and piloted in the Western Balkans for the first time by SEESAC within the Gender Equality in the Military project .The programme is based on a peer to peer approach, between relevant representatives of institutions, presidents of SALW commissions, and SEESAC’s gender and SALW experts. Confidentiality is one of the Gender Coach Programme’s strongest assets. The programme is also accompanied by long-term consultative support, where SEESAC experts are available to respond on a case-by-case basis to institutions’ needs. Albania is currently also part of the Gender Coach Programme. SEESAC works under the framework of EU COUNCIL DECISION (CFSP) 2016/2356.