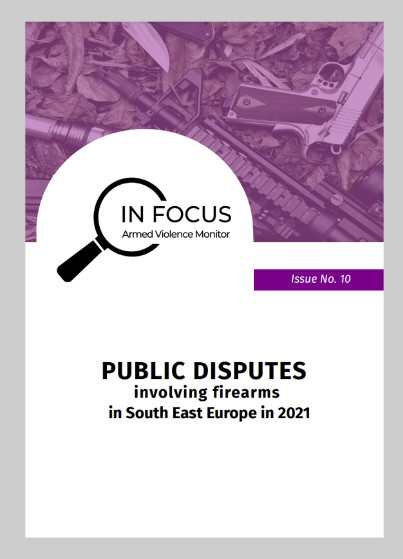 SEESAC’s latest issue of the In Focus Armed Violence Monitor sheds light on public disputes involving firearms in South East Europe (SEE) during 2021 and gives a comparative overview to 2020. One of the key findings reveals that a total of 267 public disputes involving the use of firearms were reported during 2021, showing a 20% decline from 2020.

Firearm incidents escalating from public disputes pose a serious threat to citizens' lives and their security. This fact is even more alarming given these incident’s frequency and grave consequences which include fatal outcomes, injuries, threats and property damage.

The use of firearms in public disputes is a serious risk to citizens' lives and their security, as severe outcomes are frequent, placing these cases alongside incidents in the context of domestic violence, criminal context and undetermined shootings.

Key findings from this issue include a total of 267 public disputes involving the use of firearms, showing a 20% decline from 2020. When the type of weapon was known, the patterns seen in 2020, remained the same in 2021, thus, handguns continued to be the main weapon of choice in both years (98 cases), with rifles/shotguns (21 cases) and  automatic/military-grade weapons (17 cases) following at a considerable distance.

In 2021, the number of deaths increased by 23% from 2020. Thus, 32 people, all men died as a result of the use of firearms in public disputes, while a total of 120 people were injured and 108 were threatened with firearm. Two men died by suicide with firearms after using a firearm during a public dispute.

More information on public disputes involving firearms is available in the report produced based on the data from the Armed Violence Monitoring Platform (AVMP). Download the report here.

The Armed Violence Monitoring Platform (AVMP) has been established by SEESAC with EU funding within the framework of EU Council Decision (CFSP) 2016/2356 and is currently supported through EU Council Decision (CFSP) 2019/2111, in support of SEESAC disarmament and arms control activities in South-East Europe. It captures data on firearm-related incidents happening in Albania, Bosnia and Herzegovina, Montenegro, Serbia, North Macedonia, Kosovo* and the Republic of Moldova with the purpose of making essential data available to all interested parties working on small arms and light weapons control.

The data is gathered daily from the relevant authorities' official websites, as well as print and online media.  The collected data range from the type of incident, firearms used, age and gender of the victim and the perpetrator, outcome of the incident. etc. Basic data analysis is also provided for various data sets aiming to discover trends related to the incidents. Quality assurance is conducted rigorously by SEESAC.