In Focus Armed Violence Monitor: Number of Firearm Incidents in Criminal Context Increased in 2021 Compared to 2020 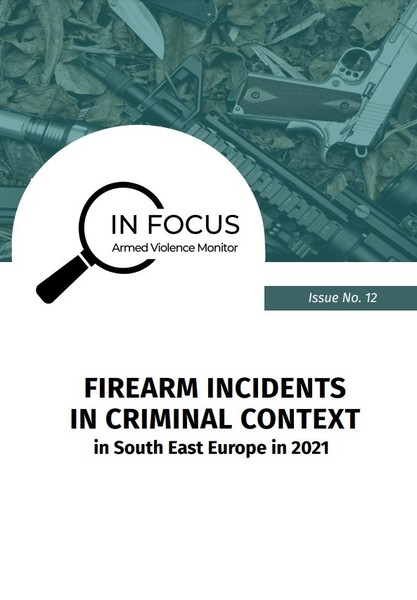 Incidents related to organised crime, armed robberies, firearm thefts, as well as other incidents with a criminal background, continue to have an adverse impact on citizens across South East Europe, thus confirming the link between firearms and criminal activities. To better understand the linkage, SEESAC publishes its In Focus Armed Violence Monitor,  addressing firearm incidents in the criminal context. The report reveals that a total of 594 such incidents were recorded in 2021, showing a 12% increase from 2020.

Handguns continue to represent the most used type of weapon, reported in 58% of incidents. In 186 cases, weapons were in illegal possession, while in 46 cases, they were in legal possession. in the majority of cases, legally owned firearms were reported stolen. This data call for a continuous fight against trafficking, misuse, and illicit possession of firearms across the region.

Men continue to be the overwhelming majority of perpetrators - out of 1,117 perpetrators, sex was reported for 662 perpetrators, of whom 98% were men. In 2021, 465 victims were reported, 15% more than in 2020. Men also accounted for the majority of victims - when sex was reported, 63% were men. Thirty-three people were killed, 37 were injured, 312 were threatened with firearms, and 57 people reported that their weapons were stolen.

To learn more about the reported incidents, download the report here.

The Armed Violence Monitoring Platform (AVMP) has been established by SEESAC with EU funding within the framework of EU Council Decision (CFSP) 2016/2356 and is currently supported through EU Council Decision (CFSP) 2019/2111, in support of SEESAC disarmament and arms control activities in South-East Europe. It captures data on firearm-related incidents happening in Albania, Bosnia and Herzegovina, Montenegro, Serbia, North Macedonia, Kosovo* and the Republic of Moldova with the purpose of making essential data available to all interested parties working on small arms and light weapons control.

The data is gathered daily from the relevant authorities' official websites, as well as print and online media. The collected data range from the type of incident, firearms used, age and gender of the victim and the perpetrator, outcome of the incident, etc. Basic data analysis is also provided for various data sets aiming to discover trends related to the incidents.