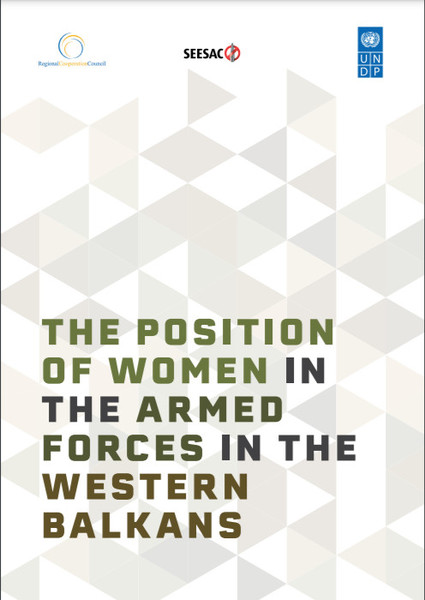 In December 2021,  Ministries of Defence (MoDs) and Armed Forces (AFs) in the Western Balkans launched the 2nd regional Study on the Position of Women in the Armed Forces in the Western Balkans, the result of a unique regional process in which the MoDs of Bosnia and Herzegovina, Montenegro, the Republic of North Macedonia, and the Republic of Serbia actively took part.

With the support of UNDP SEESAC, a regional working group, composed of representatives of the Western Balkans’ MoDs and AFs, was established to coordinate the data collection process, and draft the Study.

The 2nd regional Study identifies key progress and gaps in ensuring the equal position of women and men in the military, and it builds directly on the 1st regional Study, published in 2014. The research methodology was set up  according to the 1st regional Study model and represents a form of institutional research of official practices and processes conducted through a questionnaire and supplemented with qualitative information where appropriate.

The share of women was increased among the ranks of soldiers, non-commissioned officers, and officers (e.g. the most significant increase of female soldiers was documented in the Republic of Serbia: 15.5% in 2019 comparing to 9.9 % in 2012, while Montenegro documented the largest increase of female officers: 9.5 % in 2019 comparing to 0.7 % in 2012).

It was noticed that in all countries the share of women among non-commissioned officers was lower than that of officers. In terms of vertical mobility, there has been a rise in the share of women in command positions since 2012. (e.g. in 2019: 3.7% in Bosnia and Herzegovina; 9% in Montenegro; 7% in the Republic of North Macedonia and 1.8% in the Republic of Serbia). The data also indicate an increase in the participation of women in peacekeeping missions (including UN, NATO, and EU missions) (e.g. the highest rise was seen in Bosnia and Herzegovina – 8.6 % in 2019 in comparison to 3.5 % in 2012).

Based on the research findings, the recommendations were developed, aiming for further improvement in the following areas: gender-responsive data collection,  the representation of women in uniform, working conditions and career development opportunities, work-life balance, as well as protection against discrimination, mobbing, and gender-based violence. The findings and recommendations of the 2nd regional Study should contribute to creating and implementing the evidence based and gender responsive policies and practices in the defence sector.

The results of the 2nd regional Study were presented during the Ministerial conference dedicated to identifying A Way Forward on Gender Equality in the Defence Sector in the Western Balkans, which was co-hosted by the UNDP SEESAC and the Ministry of Defence of Montenegro, on 7 December 2021 in Budva, Montenegro. MoDs and the AFs of the four Western Balkans countries’ strong commitment to gender equality and determination to improve the position of women in the defence sector was confirmed by signing the Ministerial Declaration.

The Ministerial Conference was organized within the project Strengthening of Regional Cooperation on Gender Mainstreaming in Security Sector Reform in the Western Balkans, which has been implemented by UNDP SEESAC since 2012, with support of the Ministry of Foreign and European Affairs of the Slovak Republic and Norwegian Ministry of Foreign Affairs.