Moving forward: Taking mainstreaming of gender in SALW control to the operational level 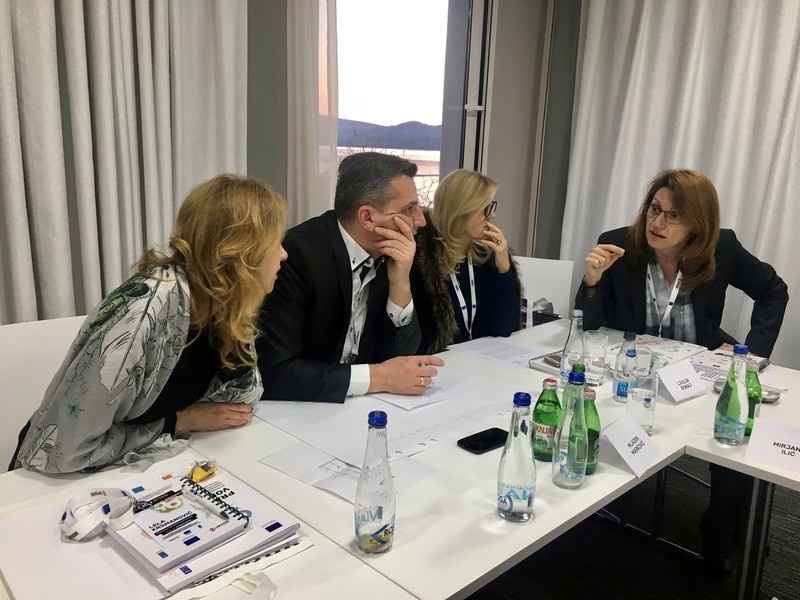 In our previous efforts, we at UNDP SEESAC have focused on disseminating knowledge of gender dimension of small arms and light weapons (SALW), building the capacity of relevant institutions to advance gender equality, and achieving a consensus among decision- and policy-makers around the importance of gender perspective for effective small arms control. With that consensus now established, UNDP SEESAC is taking its work to the next level. Under our new DG NEAR-funded project launched on 1 September, over the next three years, we will be supporting relevant institutions in the region to integrate the gender perspective into their operational level activities – thus allowing for a tangible improvement of safety for both women and men in the Western Balkans.

Long ignored fact: Firearms are undoubtedly immensely gendered in many of their aspects.

Men: In the Western Balkans, men make up 97% of firearms owners and 98% of perpetrators of firearm-related incidents. Men also account for the majority or 83% of victims of such incidents. Young men are particularly vulnerable to armed violence, both as perpetrators and as victims. The data further indicates that men are particularly at risk of incidents in the criminal context.

Women: On the other hand, women only marginally own firearms, hardly ever misuse them, but are disproportionately affected by them – making up 16% of the victims. The patterns of their victimization are clearly linked to domestic violence. 61% of all women killed in the region were killed by an intimate partner or a family member. Of those, 37% were killed with a firearm.

In 2016, UNDP SEESAC conducted the baseline study which revealed that firearms control strategies for the most part ignored the very distinct and radically different relationship and experience women and men have with firearms, thus largely marginalizing gender perspective in firearms control. By ignoring gender dynamics, SALW control strategies also failed to address some of the underlaying causes of armed violence.

For instance, although 51% of all firearm incidents in the region are committed by young men, SALW control strategies never questioned whether masculine norms are fuelling firearms misuse, nor did they envisage a single preventive measure targeting young men.

Similarly, SALW control policies did not sufficiently recognize the extent to which the presence of a gun at home affects women’s safety, nor how dramatically it increases the risk of a lethal outcome in the domestic violence context. With the response missing, is it any wonder that femicide figures remain alarming yet the same, year in and year out?

Changing this dynamic will be hard for as long as women continue to be underrepresented in SALW control policy-making processes that take place in men-dominated institutions.

Since 2016, UNDP SEESAC team has been working closely with institutions in South East Europe to bring the gender perspective from the margins to the very core of policymaking. Massive data collection exercises – in the form of detailed and long-awaited SALW Surveys  - have been undertaken and contributed to a growing body of research that informed policymaking.

To further facilitate this, practical gender mainstreaming tool outlining key steps in developing, implementing, and monitoring gender-informed SALW control strategies were developed and tested. Through the gender coach programme we provided one-on-one learning sessions to the Heads of SALW Commissions in the region, empowering them to initiate and steer the change in their institutions. At the same time, Gender and SALW training delivered to SALW Commission members increased their competencies and commitment to pursue the integration of the gender perspective into small arms control. In a sense, we were creating a community of dedicated actors from the top down.

As a result of these efforts, the policy landscape in the Western Balkans has changed significantly.

The ongoing shift from gender blind to increasingly gender-responsive solutions is most evident in the recently adopted strategies and action plans for the implementation of the Western Balkans SALW Control Roadmap. This new generation of strategies foresees an ambitious set of measures to:

Still, challenges remain with respect to the implementation of these measures. Progress achieved has not been even across the region and institutions often miss operational know-how to address the gendered dimension of firearm misuse. Policies are still being developed and implemented in silos, while a multisectoral approach is needed. The ongoing gender screening of SALW control legislation and policies has revealed gaps in legislative and policy frameworks which need to be addressed.

Taking the struggle to the next level, with the help of a DG NEAR project

To help counter these weaknesses, UNDP SEESAC has launched a new project that will help push the struggle to its next natural step – the operational level. Namely, the European Union, represented by the European Commission’s DG NEAR, has funded a Support for Enhancing the Fight Against the Illegal Possession, Misuse And Trafficking of SALW In The Western Balkans project launched this September.  One of the project’s four key components specifically aims to narrow in on the remaining challenges in the realm of gender and SALW, and support institutions in the Western Balkans to translate their existing commitments into practical actions.

The project will place particular emphasis on the prevention of firearms use in the context of domestic violence. Although the widespread nature of domestic violence has already placed it high on the agenda, the urgency of the matter has been additionally highlighted by a 30% rise in femicide committed with firearms seen in 2020 – triggered by the pandemic. In cooperation with relevant institutions in the Western Balkans, we will conduct a regional analysis of the institutional response to the use of firearms in domestic violence. This research will subsequently inform ways to assist police officers to improve their operational work.

For instance, we will explore practical strategies and develop tools to ensure that gender concerns are duly considered before a firearms license is issued.  This could mean that the risk of domestic violence is assessed and given proper weight during the applicant’s background check process.

Similarly, a tool and training for police officers will be developed to enable them to adequately and in a timely manner assess and address the risks of firearms being used, when dealing with a domestic violence case.

In addition, firearms focal points will be trained in gender analysis and gender-sensitive data collection, as a way of ensuring that the gender perspective remains a part of tactical and strategic intelligence service and that it informs and supports law enforcement’s accurate understanding and tackling of firearms crime.  In doing so, we will build on the work done through the implementation of the EU Council  Decisions 2016/2356, 2018/1788 and 2019/2111 as well as on the knowledge generated through UNDP Serbia project Reduce Risks Increase safety and upscale innovative practices developed within that project.

In addition, the project will explore strategies for sustainable gender mainstreaming in small arms control through dialogue with the main stakeholders. Namely, through training and follow up activities, it will further enhance the capacities of SALW Commissions and support cooperation between them and governments’ gender equality mechanisms.

Increasing participation of women in small arms control remains a priority.  For that purpose, we will map out factors hindering women’s full participation in SALW control structures and processes, and develop evidence-based and practical proposals for how to effectively address these obstacles. Furthermore, we will work with women's organizations to enhance their knowledge of small arms control issues and facilitate their inclusion in discussions on the topic.

Last, but certainly not least, we will explore how masculine norms and misuse of firearms are interconnected. Region-wide research focusing on factors fuelling demand and misuse of firearms in the Western Balkans will be based on gender-sensitive methodology and will facilitate discussion with policy-makers about the gendered dynamic of those issues.

A gender-blind approach to a highly gendered phenomenon such as firearms simply does not work. Gender is one of the key factors shaping both the demand and the misuse of firearms, so it must also be an integral part of any sustainable solution to address them.  It is not an add-on to small arms control - it is its central component.

With this serving as our motto, through our new project, we plan to tackle the SALW-related problems by zeroing in on its gender aspects on the operational level. We believe this could significantly contribute to the reversal of persistent negative trends in firearms demand and misuse and secure a safer environment for both women and men.

Stay tuned for more details on other components of the project.