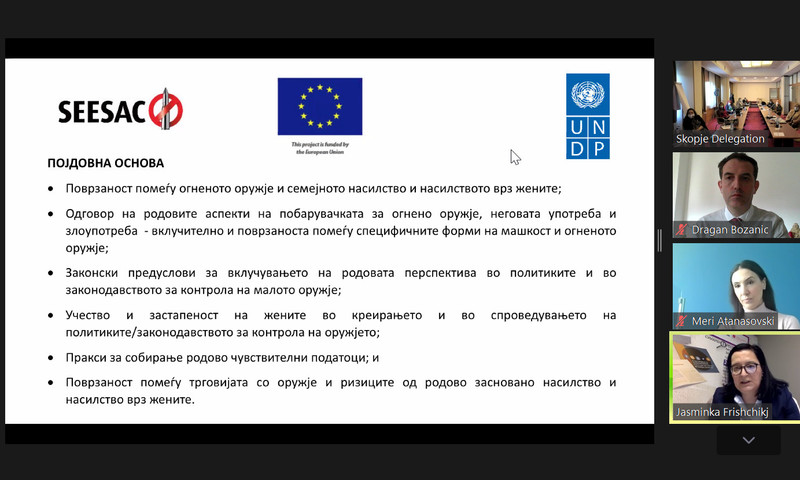 In cooperation with institutions in the region, UNDP SEESAC is conducting a comprehensive analysis of SALW control frameworks to support governments to fully integrate the gender perspective into relevant legislation and policies.  In North Macedonia, we discussed with the SALW Commission the key findings of the gender screening of legal and policy framework on firearms.

Extensive evidence provided by UNDP SEESAC has thoroughly documented highly gendered aspects of small arms.  In South East Europe, men make up for 97.2 % of firearms owners and commit 98.4 % of firearm-related criminal offenses. They also account for the majority of victims of firearm-related homicides and injuries (83.8 %). Women, on the other hand, own only 2.8 % of firearms, hardly ever misuse them but are disproportionately represented among the victims at 16.2 %.  The patterns of women’s victimization are primarily related to domestic violence which is widespread in the Western Balkans. 61% of all killed women were killed by a family member, compared to 12.4% of all killed men. 43.5% of all women killed by an intimate partner in SEE were killed with firearms. According to SEESAC’s Armed Violence Monitoring Platform, 23 women were killed by their family members in 2020; 37.4% of reported domestic violence incidents which involved firearms had a lethal outcome. The misuse of firearms in domestic violence is more lethal than any other type of incident, and it is almost four times more deadly than in criminal incidents.

In order to effectively address specific challenges that women and men face with respect to small arms, relevant legislation and policies must fully take into account the role that gender perspective plays in shaping and understanding various aspects of small arms use, misuse. The Roadmap for Sustainable SALW Control in the Western Balkans, adopted in 2018, places specific importance on the advancement of gender equality and calls for the full integration of gender and age concerns into small arm control policies.

Since then, the authorities in the Western Balkans have made significant progress in integrating the gender perspective into SALW control policies. This has been particularly the case with strategies and action plans for the implementation of the Roadmap, which foresee an ambitious set of measures to address linkages between firearms and domestic violence; respond to gendered aspects of firearm demand, use and misuse – including linkages between specific forms of masculinity and firearms; increase participation and representation of women in arms control and improve gender-sensitive data collection practices.

In order to facilitate the implementation of these commitments and support the authorities to further mainstream gender perspective, UNDP SEESAC, in close cooperation with the SALW Commissions, is currently conducting a comprehensive gender analysis of legislation relevant for arms control. The analysis aims to assess gender responsiveness of legislation and policies, map gaps in legislative response, and provide recommendations for authorities on how to advance such responsiveness.

During the presentation of key findings of the analysis in Skopje, it was noted that institutions in North Macedonia have made considerable efforts at legislative and policy levels to address the gendered dimension of small arms. This is primarily reflected in legislative provisions aimed at preventing and combating the misuse of firearms in the context of domestic violence. Furthermore, the strategic framework for SALW control has increasingly recognized gender concerns related to small arms. The analysis also highlighted specific challenges and measures needed to improve the gender responsiveness of small arms control. In that regard, it was discussed how to further enhance institutional response to the use of firearms in domestic violence, address gendered factors fuelling demand for firearms and shaping risk-taking behaviour, increase the participation of women in SALW control and establish preconditions for the sustainable integration of the gender perspective into SALW control.

The gender analysis of legislation is an integral part of SEESAC’s ongoing support to the region through EU Council Decision 2018/1788, on harmonization of arms-control legislation with the EU regulatory framework and other related international obligations across the region.

Apart from North Macedonia, the analysis is currently being implemented in Albania, Bosnia and Herzegovina, Kosovo* and Montenegro.

The activity represents a continuation of long-term support in this area provided to the region with substantial EU funding, including research and development of practical gender mainstreaming tools, implementation of thorough SALW Surveys that enabled collection and analysis of sex and age disaggregated data and development of a wide range of gender-specific knowledge products.  In addition, implementation of the gender coach programme, with the heads of  SALW Commissions and  Gender and SALW training for members of the SALW Commissions significantly contributed to their increased competencies and commitment to integrating the gender perspective into small arms control.

*Reference to Kosovo shall be understood to be in the context of the Security Council Resolution 1244 (1999).