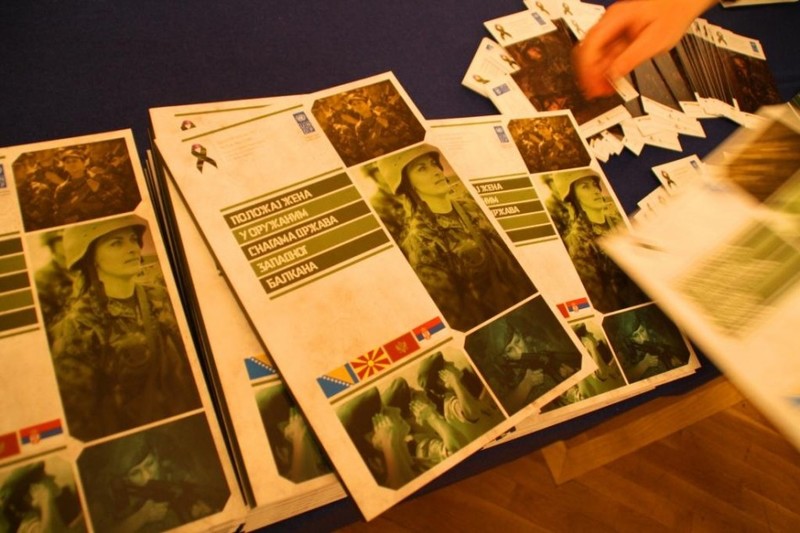 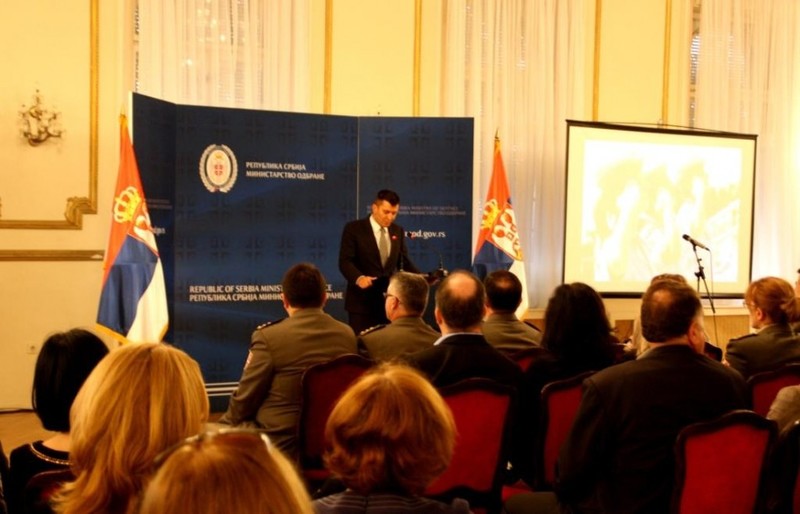 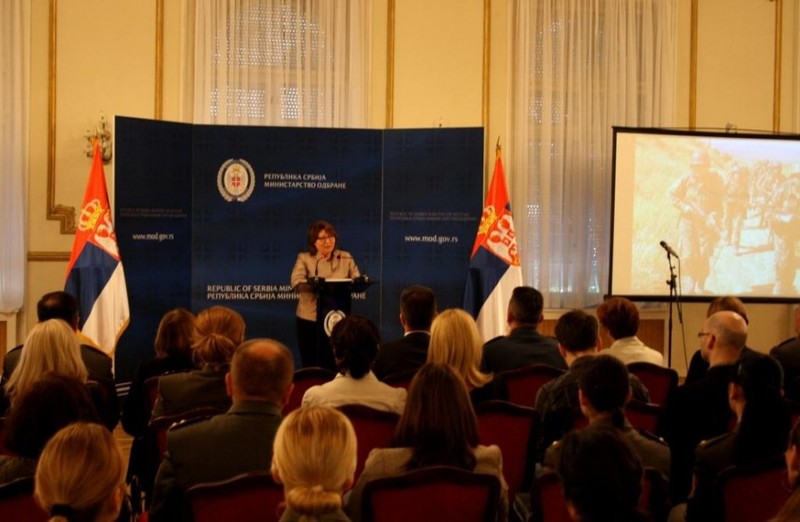 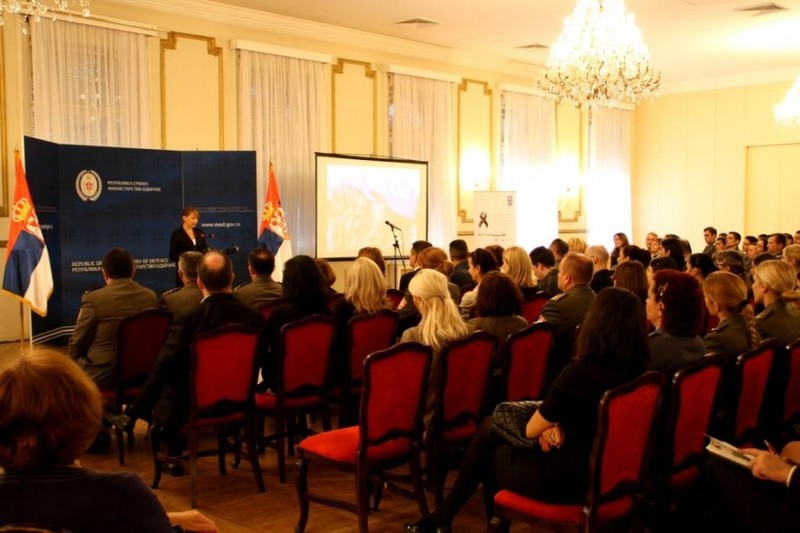 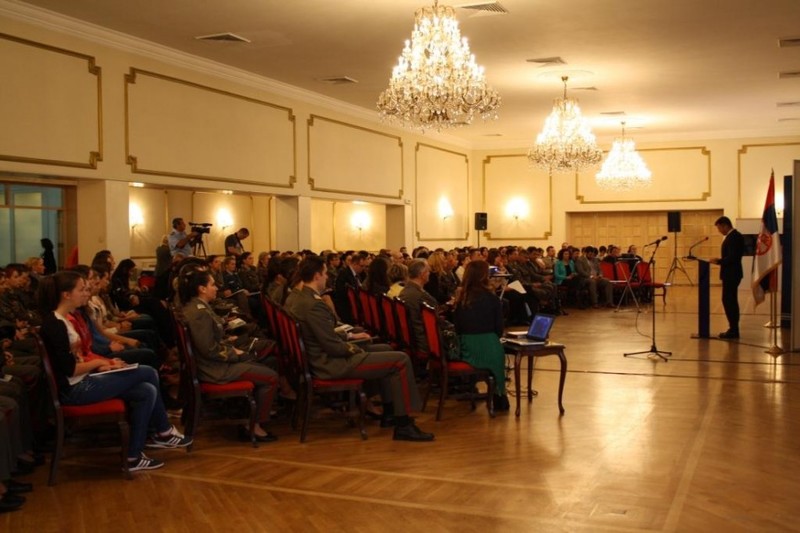 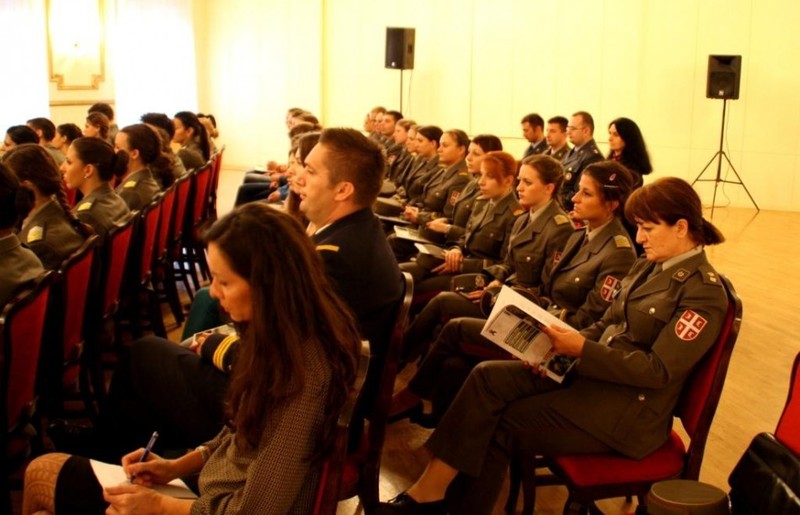 Following its presentations in Skoplje, Sarajevo, and Podgorica, the study on The Position of Women in the Armed Forces in the Western Balkans was unveiled on 14 October 2014, in the Central Hall of the Serbian Armed Forces (SAF) in Belgrade, Serbia.

The study is a joint endeavor of the Ministries of Defence of Bosnia and Herzegovina, Montenegro, Serbia, and the former Yugoslav Republic of Macedonia, conducted with the support of UNDP’s SEESAC initiative, and as such represents a truly unique example of regional cooperation. It provides regionally comparable data on the position of women in the Armed Forces (AFs) in the Western Balkans – invaluable for the development and implementation of effective gender-sensitive recruitment and retention policies.

Organized by the Ministry of Defence of the Republic of Serbia with support of UNDP’s SEESAC initiative, the presentation of the Study was attended by some one hundred representatives of the Ministries of the Republic of Serbia, independent oversight bodies, members of the SAF, cadets of the Serbian Military Academy, students of the Military High School, international organizations, and civil society organizations.

The Ministry of Defence State Secretary, Mr. Zoran Đorđević, opened the event and presented the results of the National Action Plan (NAP) for the implementation of UNSC Resolution 1325.  Mr. Đorđević emphasized that since the implementation of NAP was initiated, the number of women in the military has increased. There is a growing interest among women to study at the Military Academy, Military Medical Academy and, as of this year, girls are also admitted into the Military High School.  Mr. Đorđević confirmed that the Ministry of Defence will continue to support the implementation of the NAP in order to further advance gender equality in the MoD and SAF.

Ms. Irena Vojackova-Sollorano, UN Resident Coordinator and UNDP Serbia Resident Representative, congratulated the Ministry of Defence on the achieved results in advancing gender equality in the military. Ms. Sollorano highlighted that women’s active participation in the security sector is crucial for these institutions’ ability to adequately address the needs of both men and women. She further emphasized that security institutions are undergoing this segment of reform processes in order to be able to respond more efficiently to emerging global security challenges. UNDP is supporting regional cooperation and the activities related to the inclusion of gender equality in Security Sector Reform (SSR).

Ms. Bojana Balon from UNDP’s SEESAC initiative underlined that the Study was conducted under the umbrella of the SEESAC project titled “Gender Equality in the Military,” which has been directly contributing to the unveiling of many gender stereotypes and raising gender awareness in the armed forces in the Western Balkans. This project is generously funded by the Ministry of Foreign Affairs of the Kingdom of Norway, the Swedish Armed Forces and the United Nations Development Programme.

Dr. Jovanka Šaranović, Director of Strategic Research Institute and Gender Advisor to the Minister of Defence, also stressed the importance of regional cooperation, which enables the exchange of experiences and knowledge on including the gender perspective in defence polices among the Ministries of Defence in the Western Balkans. Dr. Šaranović presented the content and the results of the study including the following data and information:


Given that military education has only recently become accessible to women in the region, women are still mostly represented among the lowest hierarchical positions, in civilian, medical, and administrative roles. On the other hand, statistics on education disprove stereotypes about the military profession as a man’s career and one in which women are unable to perform tasks equally:

SEESAC’s Gender Equality in the Military project aims to create a more conductive environment for the advancement of women in the military in the Western Balkans. Within this as its goal, SEESAC is supporting the Ministries of Defense in Bosnia and Herzegovina, the former Yugoslav Republic of Macedonia, Montenegro, and Serbia in their effort to ensure better integration, retention and professional development for women in the armed forces.  SEESAC also works to foster women’s participation in decision-making, as well as gender sensitive change in the organizational culture of the military.