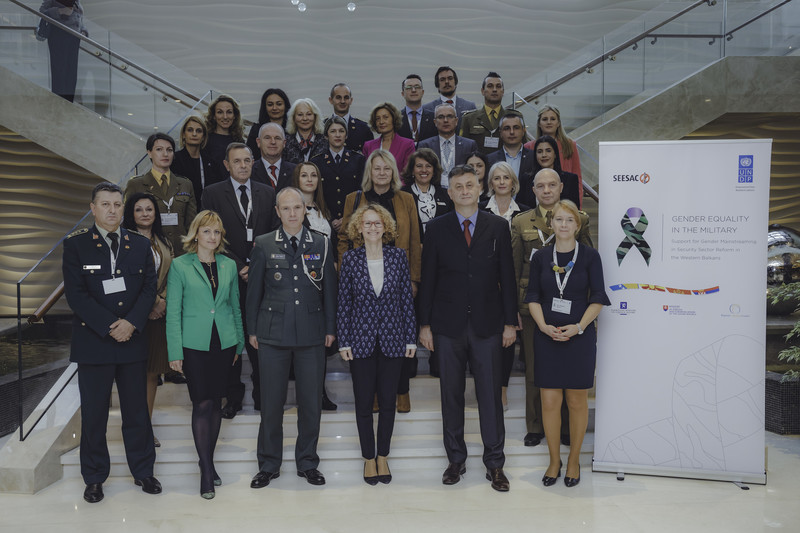 Twenty-two (22) representatives of the Ministries of Defence (MoDs) and Armed Forces (AFs) from Bosnia and Herzegovina, Montenegro and the Republic of North Macedonia participated in the 11th Regional Meeting of Gender Equality Mechanisms in the MoDs and AFs in the Western Balkans with the aim of sharing  experience, progress and challenges in improving gender equality in their respective institutions in the period between two regional meetings.

Ms. Radmila Shekerinska, Minister of Defence of the Republic of North Macedonia, opened the meeting emphasizing the need to increase the number of women in the security sector and armed forces, and thus enable them to fully and equally contribute to the security institutions. Minister Shekerinska commended the support UNDP SEESAC is providing to strengthening capacities of the MoDs and AFs to develop gender responsive human resources polices with the aim to remove structural barriers and create equal career opportunities for both women and men.

H. E. Henrik Markuš, the Ambassador of the Slovak Republic to the Republic of North Macedonia, said that Slovakia is actively promoting the Security Sector Reform (SSR) within the UN Group of Friends of SSR, adding that since 2019 it has been supporting the UNDP SEESAC regional project on integrating gender into the SSR in the Western Balkans. H. E. Markuš particularly commended the regional platform of the MoDs and AFs in the Western Balkans, as it represents an excellent instrument for knowledge and information exchange, which contributes to the capacity building of gender equality mechanisms in the MoDs and AFs.

Lieutenant Colonel Egil Daltveit, Defence Attaché from the Royal Norwegian Embassy in Belgrade, highlighted that gender equality is regarded as an institutional value in the Norwegian Armed Forces that is striving towards peace, sustainability and prosperity for the whole country. Gender equality and equal opportunities for both women and men maximize the security of the entire country and its citizens.

Ms. Narine Sahakyan, UNDP Resident Representative, commended continuous efforts that the MoDs make in integrating gender perspective into their defence policies and practice. Ms. Sahakyan underlined that achieving gender equality in the military is essential for long-lasting peace and sustainable development, as reflected in the SDGs. UNDP supports the governments in the region in integrating gender equality into the Security Sector Reform in accordance to UNSCR 1325, which reflects the need for the increased participation of women in peace and security agenda.

During the two-day workshop each delegation presented the latest developments in mainstreaming gender equality in their respective institutional and military practice and discussed the annual work plan for 2020.

The Strengthening of Regional Cooperation on Gender Mainstreaming in Security Sector Reform in the Western Balkans project is financed by the Governments of Norway and the Slovak Republic. With the support of UNDP SEESAC, the project provides the Ministries of Defence and the Armed Forces in the Western Balkans with a platform where they can exchange ideas and develop policies to ensure long-term and sustainable inclusion of the gender perspective in defence policies and practices.