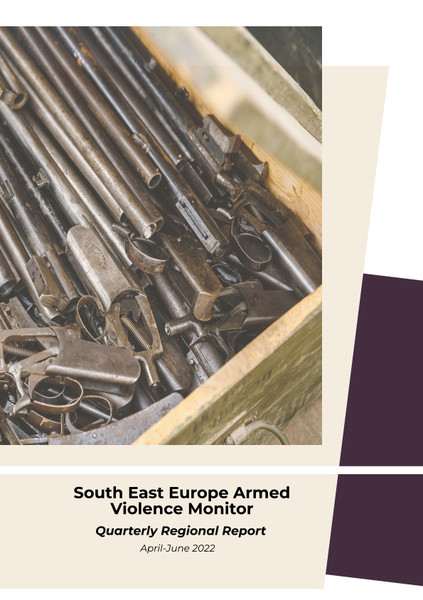 SEESAC’s Quarterly Armed Violence Monitor Regional Report for the period April-June 2022 reveals that the number of firearms incidents declined by 11.3% comparing to the first quarter of the year. Anyhow, the number of people killed in these incidents considerably increased – a total of 42 people lost their lives during the second, comparing to 24 during the first quarter of the year.

The widespread proliferation and misuse of firearms continue to pose a grave threat around the globe while their negative impact is observed in various spheres of our societies - security, human rights, social and economic development.

In total, 723 incidents were recorded during the observed period[1]. With 336 cases recorded, weapon seizures continue to be the most reported type of incident, while handguns were most seized type of firearms. Another worrying trend was noted, too – in total, 33 firearm-related domestic violence incidents occurred during this quarter, in which eight people were killed of which five were women. Since the quarter one, the number of domestic violence cases increased by 50% which were all committed by men, while women accounted for majority of victims.

To learn more details on the reported incidents, download the report here.

The collected data range from the type of incident, firearms used, age and gender of the victim and the perpetrator, outcome of the incident, etc.

The AVMP aims to make essential data available to all interested parties and serve as an informative tool for interventions with the overarching goal of a more effective arms control framework and reducing their negative impact on civilians.

The AVMP is supported with funding from the EU Council Decision (CFSP) 2019/2111 to support SEESAC disarmament and arms control activities in South-East Europe, reducing the threat of illicit small arms and light weapons their ammunition.

[1] Data retrieved on 20.07.2022. Given that news articles may be published after the incidents occurred or that recorded incidents can be updated with new pieces of information, the given statistics may slightly differ in the future.