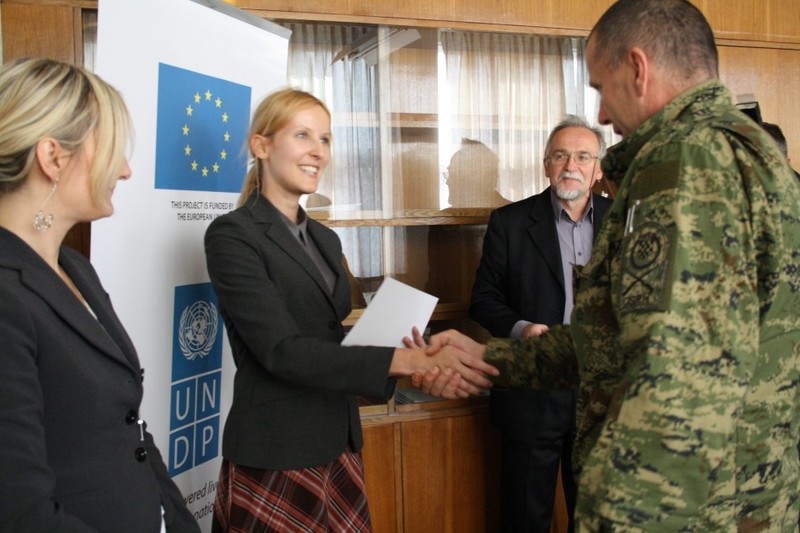 On 18 November, the third and final module of the Regional Training Course on Stockpile Management, organized by SEESAC with the support of UNDP BiH, was concluded. During this week-long training, 19 operations-level officials from the ministries of defense and interior of Bosnia and Herzegovina, Croatia, former Yugoslav republic of Macedonia, Montenegro and Serbia learned about Stockpile Facilities and Transportation of SALW and Associated Ammunition.

The training was financed by the European Union (EU), which provided the funds under the EU COUNCIL DECISION 2010/179/CFSP, dated 11 March 2010, to support SEESAC arms control activities in the Western Balkans in the framework of the EU Strategy to combat the illicit accumulation and trafficking of SALW and their ammunition.

Ms. Natalia Dianiskova - Head of the Section for Social Development, Civil Society and Cross-Border Cooperation at the EU Delegation in BiH, Ms. Amna Berbic - Cluster Manager at the UNDP BiH, and Professor Berko Zecevic Head of the Department for Defense Technologies presented the graduates with their certificates on 18 November.

Ms. Berbic noted that frequent explosions in weapons and ammunition storages, such as those that took place in Knin, Croatia in September of 2011 and Paracin, Serbia in October of 2006 clearly demonstrate the need for improved stockpile security.  Ms. Dianiskova commended the countries in the region for recognizing this need, which is evident in the high number of officials participating in all of the modules of the Regional Training Course on Stockpile Management. Professor Zecevic particularly highlighted the value added to the quality of the training because of its regional character. In addition to the lectures and practical exercises, the participants benefited from the exchange of experiences and best practices identified by their colleagues from the region who are facing similar challenges.

The course was designed to help countries in the region increase their capacities in the area of stockpile management procedures and thereby increase the physical control over the existing storages in the region. The previous two trainings, which were held in September and October, focused on Planning and Managing of Stockpile Locations and Inventory Management and Accounting Control Procedures.

All three modules took place at the Faculty of Mechanical Engineering of the University of Sarajevo, and were conducted by a team of prominent experts from the Western Balkans and Germany. The course curriculum was in line with international standards and best practices in stockpile management with special emphasis on safety and security of stockpiles and quality of stockpile procedures.