Regional Seminar on Marking and Tracing of Firearms 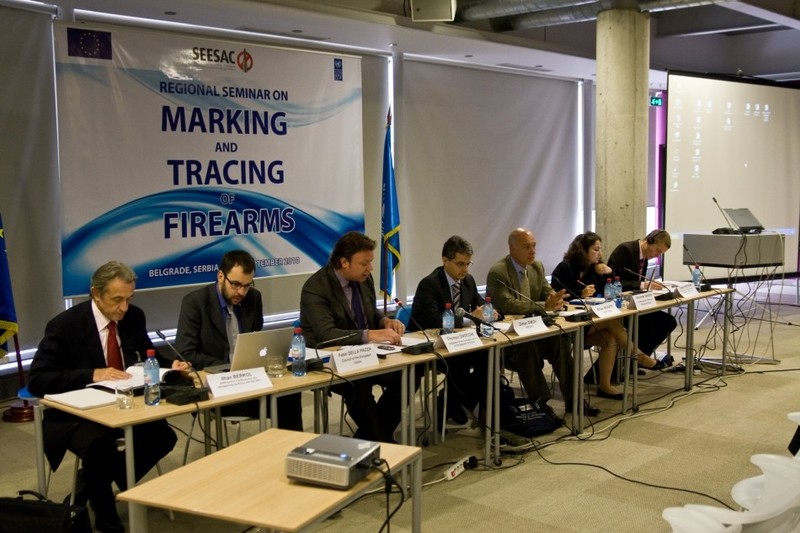 On 14-15 September 2010 in Belgrade, SEESAC organized a regional seminar on marking and tracing of weapons. The seminar is funded by the European Union (EU) and it is an activity under the EU Council Decision 2010/179/CFSP in support of SEESAC arms control activities in the Western Balkans, in the framework of the EU Strategy to combat the illicit accumulation and trafficking of SALW and their ammunition.

The goal of the seminar was to provide an update on the adherence to international instruments, the adoption of national legislation on marking and tracing in the countries from the Western Balkans and to present an overview of the implementation of their national legislation. A specific objective was to review the implementation of the requirement for marking of imported weapons under the UN Firearms Protocol.

Afterward the representatives from Albania, Bosnian and Herzegovina, Croatia, Montenegro and the former Yugoslav Republic of Macedonia provided detailed information about the national implementation of marking and tracing regulations in their countries.

The second day of the seminar was reserved for group discussions. The aim was to provide an opportunity to exchange views and ideas, and to identify support mechanisms and synergies in the following areas:  development and implementation of policy and legislation; technical support in terms of equipment for marking and tracing; capacity building needs; and participation in the Permanent International Commission for Weapons.

During the group discussions, participants presented their concerns, needs and the challenges they were facing in the process of marking and tracing of weapons. The following main issues were identified:


There is interest and a clear need for a regional conference on the requirements for joining the Permanent International Commission for Weapons ;
SEESAC was identified as the main partner in the process of regional cooperation on marking and tracing of weapons.

Overall, regional cooperation in the field of marking and tracing of weapons was judged to be essential in improving the capacity of the countries to implement international, regional and national standards and requirements.

The report from the seminar can be downloaded here.