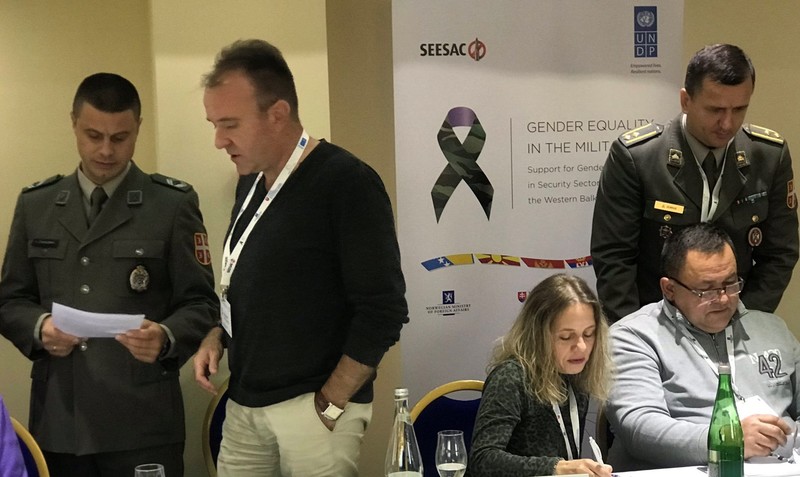 Eighteen Persons of Trust in charge of providing primary peer support in cases of gender-based discrimination, sexual harassment and abuse participated in the Capacity building Workshop, held by UNDP SEESAC from 31 October to 1 November, Zlatibor, Serbia.

The Workshop was organized at the request of the MoD with the aim of strengthening their capacities and enabling them to prevent and effectively respond to cases of discrimination and harassment.

The interactive Workshop ensured that the participants learn about the importance of gender equality in the defence system, international standards, as well as national legislative framework in the anti-discrimination area. Furthermore, the Workshop contributed to the improvement of practical knowledge and skills to recognize gender-based discrimination and distinguish it from the other forms of abuse at work. The Workshop also provided the opportunity to network through the information and knowledge exchange among Persons of Trust.

This is the first Workshop in a series of workshops foreseen to be organized for the representatives of the MoDs and AFs nominated as Persons of Trust.

The Strengthening of Regional Cooperation on Gender Mainstreaming in Security Sector Reform in the Western Balkans project is financed by the governments of Norway and the Slovak Republic. With the support of UNDP SEESAC, the project provides the Ministries of Defence and Armed Forces in the Western Balkans with a platform where, over the next three years, they can exchange ideas and develop policies to ensure long-term and sustainable inclusion of the gender perspective in defence policies and practices.