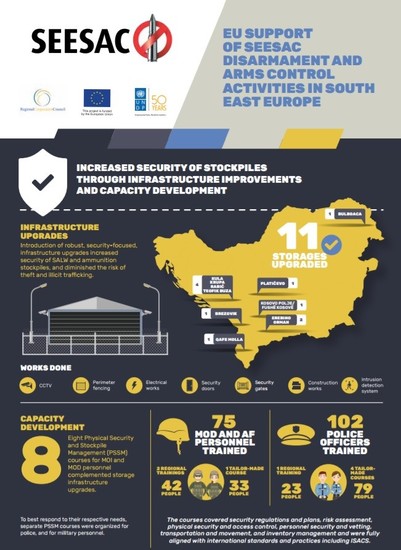 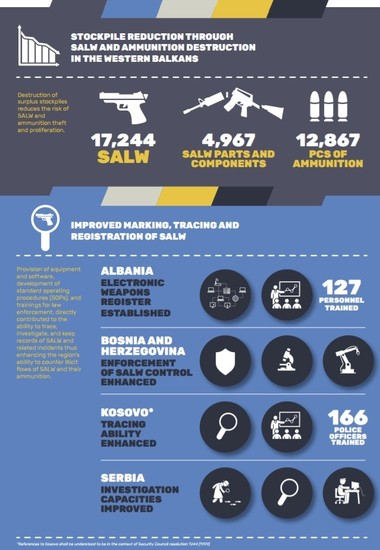 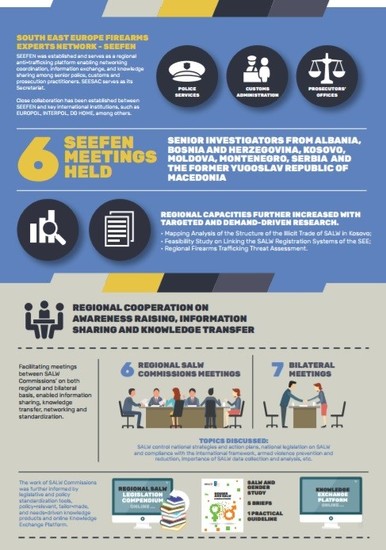 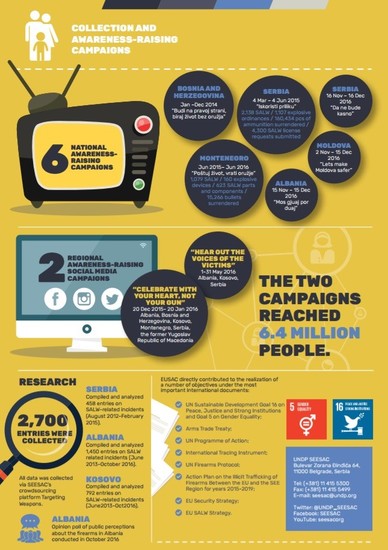 On 20 December SEESAC successfully completed the implementation of the EU COUNCIL DECISION 2013/730/CFSP in support of SEESAC Disarmament and Arms Control Activities in South East Europe (EUSAC Project) for the period 2014 – 2016 with activities in the amount of 5 million EUR in Albania, Bosnia and Herzegovina (BiH), Kosovo*, the former Yugoslav Republic of Macedonia, the Republic of Moldova, Montenegro and Serbia. We captured the achievements of the past three years in a short video which we invite you to view.

Together with our partners in the relevant Ministries, we increased the security of stockpiles in South East Europe (SEE) through infrastructure improvements and capacity development. Security was enhanced in 11 storages across the region, while eight tailor made courses on Physical Security and Stockpile Management (PSSM) for Ministry of Interior and Ministry of Defence (MoD) personnel resulted in the training of 75 MoD and 102 police personnel.

We helped reduce the risk of SALW and ammunition proliferation, by organizing destructions of 17,244 SALW, 4,967 SALW parts and components and 12,867 pieces of ammunition throughout South East Europe. In addition, each year, we also coordinated regional efforts on 9 July, International Gun Destruction Day.

As part of activities to combat illicit trafficking, we helped Albania establish an Electronic Weapons Register and trained 127 personnel. In Bosnia and Herzegovina (BiH), the enforcement of SALW control was enhanced with provision of the new equipment.  Kosovo’s ability to trace SALW was improved, with new equipment and 166 police officers trained, while Serbia increased its investigation capacities.

In addition, we also provided targeted and demand driven research to help increase regional capacities in countering SALW and ammunition trafficking by mapping and analysis the structure of the illicit SALW trade in Kosovo; producing a Feasibility Study on Linking the SALW Registration Systems of the SEE and the Regional Firearms Trafficking Threat Assessment. The Arms Laws Compendium was completed and made public on SEESAC’s website and translated into all regional languages plus English. A ground-breaking Regional Study on SALW and Gender along with a Practical Tool were published in English and all regional languages. The study provides fresh insights into the numerous ways in which gender and SALW-related behaviors and practices interconnect while the practical tool aims to guide the development of effective solutions to these challenges.

Collection and awareness raising campaigns were organized in partnership with key institutions in Bosnia and Herzegovina (Be on the right side) in 2014, Serbia (Use the Opportunity) in 2015; Montenegro (Respect life, return weapons) in 2015 and 2016.  We reached 6.4 million people by organizing two regional awareness raising campaigns, about the dangers of celebratory gunfire (Celebrate with your heart, not your gun) and about victims of gun violence (Hear out the Voices of the Victims). Finally, in autumn of 2016, to raise awareness on the dangers of SALW misuse and how it increases domestic violence, three multilingual campaigns were simultaneously held in Moldova (Let’s Keep Moldova Safer), Albania (Don’t Shoot but Love) and Serbia (Before It’s Too Late). We also mapped out firearms related incidents in Serbia, Albania, Kosovo and conducted a detailed public opinion survey on perceptions about firearms in Albania.

We are proud that the Council of the EU adopted DECISION 2016/2356 on 19 December 2016, providing additional EUR 6.5 million in support of SEESAC disarmament and arms control activities in South-East Europe for the period 2017 – 2019, in the framework of the EU Strategy to combat illicit accumulation and trafficking of SALW and their ammunition.