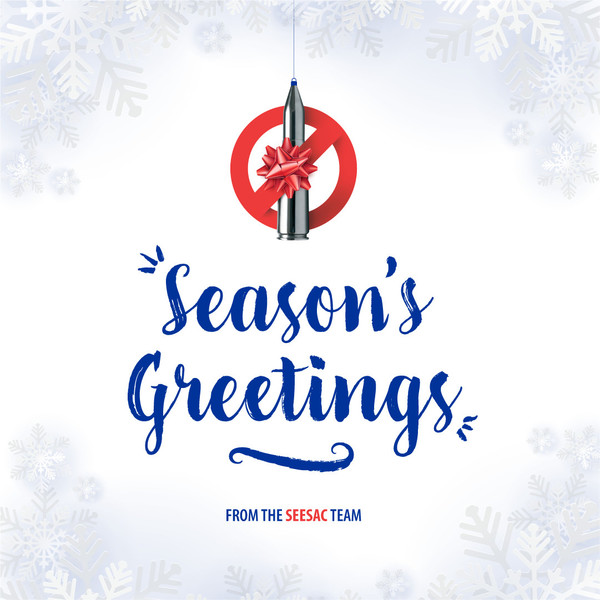 As 2021 comes to a close and the holiday season begins, we pause to take stock of and reflect on the year behind us.

In 2021 UNDP SEESAC has continued its close cooperation with the representatives of the Governments in South East and East Europe who remained firmly committed to the full implementation of planned project activities.  The donors, the EU, Germany, France, the U.S., Norway and Slovakia, as well as the UK, the Netherlands and Sweden ensured continuation of activities with their steadfast support. SEESAC also continued with close cooperation and coordination with international and regional organizations in support to the region.


SALW CONTROL
With the EU support, a comprehensive support is being provided by UNDP SEESAC to the authorities in the following areas:

Regional cooperation
In 2021, SEESAC continued supporting the two key regional platforms that represent the backbone of strategic and operational cooperation on SALW control in South-East and East Europe. The 13th and 14th regional SALW Commission meetings provided a platform for knowledge exchange and planning at the strategic level while  the 14th and 15th meetings of the South East Europe Firearms Experts Network (SEEFEN) strengthened operational cooperation on combatting illicit arms trafficking through facilitation of region-wide exchange of information, challenges and new trends.

Advancing legislative and policy framework
Comprehensive technical and advisory support was provided to SALW Commissions particularly in North Macedonia, Serbia, Albania, and Kosovo* in the development of their new SALW Strategies and Action Plans.

Harmonization of legal framework with the EU Acquis was improved through tailor made support for developing or amending Laws on Weapons and related bylaws in all the Western Balkan jurisdictions and through facilitation of the Regional Harmonization Workshop.

Gender and SALW
Advancing gender mainstreaming in SALW control, we conducted a ground breaking and truly comprehensive gender analysis of legislation and policy frameworks in five jurisdictions of the Western Balkans, directly informing policy making.  The reports on gender analysis for Albania, Brcko District of Bosnia and Herzegovina, Montenegro and North Macedonia have been published and the report for Kosovo will follow soon.

Comprehensive needs assessments of border police services in the Western Balkans to combat arms trafficking have been completed, and support initiated in development of Standard Operating procedures (SoPs) throughout the region. The SoPs have been completed in Albania and their development was initiated in Montenegro and North Macedonia. Comprehensive support in view of procurement of equipment and training is planned in 2022-2023.

Missions to conduct needs assessments of criminal police services in 6 Western Balkans jurisdictions to combat illicit possession, misuse and trafficking of SALW and ammunition have also been completed, based on which support in development of procedures, training and equipment will be provided in the forthcoming period.

Physical Security and  Stockpile Management
In Bosnia and Herzegovina  1,972 pieces of SALW were destroyed,  while 2,119 arms, 50,000 cartridges and 142 parts and components were disposed of in Moldova.

We continued publishing the AVMP quarterly reports and, in partnership with the governments in Albania, Bosnia and Herzegovina, Montenegro, North Macedonia and Serbia, published the Regional Report on Arms Exports in 2019.

Awareness raising
An online campaign has just been launched to draw the attention of the public to dangers of celebratory shooting and the illicit use of pyrotechnics so frequently practiced during the holidays.

In parallel, SEESAC continued to serve as the Secretariat of the Western Balkans SALW Control Multi-Partner Trust Fund, responsible for its programmatic coordination and monitoring. The Fund’s portfolio has this year reached $21.8 million  and 6 new projects were initiated with the support of Germany, UK, France, the Netherlands, Sweden and Norway.

We also continued to ensure a coordinated approach in the implementation of the UNDP’s Funding Windows regional project established to support the Roadmap implementation and implemented by UNDP Country Offices. This year, the UNDP COs supported the authorities to progress in countering arms trafficking, enhancing ballistic capacities, ensuring security upgrade of SALW storages, and mainstreaming gender in arms control. The project is funded by Germany.

New project launch
We are also proud to announce that in September of 2021 we launched a new 3-years long regional project funded by the EU Commission DG NEAR - Support for Enhancing the Fight Against the Illegal Possession, Misuse and Trafficking of Small Arms and Light Weapons in the Western Balkans.

With funding from Norway and Slovakia we have been supporting the Ministries of Defence and Armed Forces from Bosnia and Herzegovina, Montenegro, North Macedonia and Serbia in advancing gender equality through a regional approach.

The Conference also served as platform to launch the Study on the Position of Women in the Armed Forces in the Western Balkans, which identifies progress since 2013, highlights the gaps and marks the ways forward in achieving gender equality in the military. At the same time the regional Handbook on Preventing and Responding to Gender-Based Discrimination, Sexual Harassment, and Abuse, was launched which was developed by the MODs to help prevent and respond to cases of  gender-based discrimination, sexual harassment and abuse.

Additionally, in 2021, the  MoDs and the Armed Forces met through the regional platform of gender equality mechanisms, decisionmakers and commanders to facilitate the information exchange, knowledge sharing and planning of joint activities.  We also provided support to the Regional Network of Gender Trainers and a regional working group has been supported in planning the integration of gender perspective in military education and training.

Furthermore, Gender Coach Programme has been implemented with leaders and commanders in Montenegro’s MoD. The MoDs were supported to complete the first gender-sensitive survey on employees’ job satisfaction in Montenegro, and to initiate it in North Macedonia, replicating the good practice from the region. Seminars were organized to facilitate networking and capacity development of women officers. Capacities of internal complaints mechanisms were strengthened in Serbia and North Macedonia.

For almost two decades, SEESAC has been facilitating regional cooperation and supporting the authorities in South East and East Europe to strengthen their SALW control measures, advance gender equality, and thus contribute to citizen security, and we look forward to continuing this work in the new year.