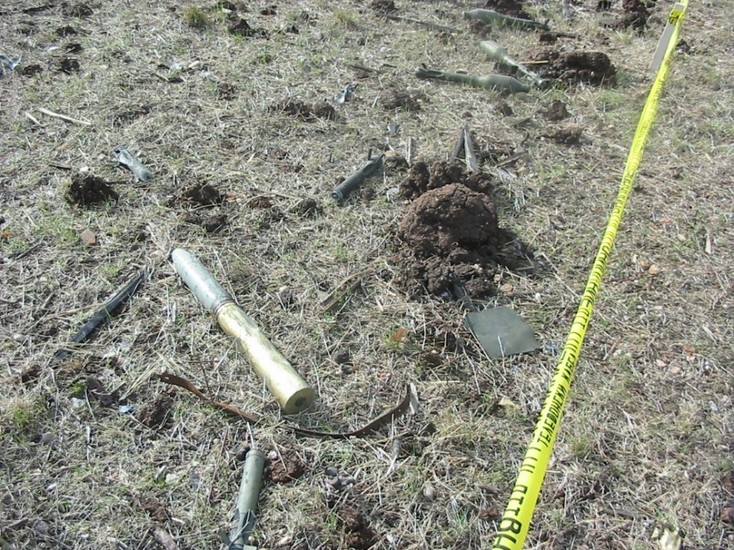 Six years ago, on 19 October 2006, a series of explosions and fires occurred at the military ammunition storage facility “7 Jul” located only 3 km from the city center of Paracin in Serbia. There were no casualties, but the depot itself was completely destroyed and the surrounding land has been rendered unusable to this day.

On this day, 1,300 tons, of the 4,000 tons of ammunition held at the depot, exploded. Seven powerful blasts shook the area right after the fire started, but many small explosions were heard throughout the day. The blasts blew out windows in most of the buildings in the town of Paracin and tremors were felt some 20km around the depot. The cause of the explosion in the warehouse was technical, according to Zdravko Ponos, the Serbian Army Chief of Staff at that time.

Following the explosion, the UNDP/SEESAC immediately offered technical support to the Government of Serbia in alleviating the impact of this incident through the project ‘Explosive Ordnance Disposal (EOD) Capacity Development in the Serbian Ministry of Defence’ which provided technical assistance in terms of equipment, training, risk management and capacity building for the EOD unit in the Serbian Ministry of Defence.

Military depots in the region remain the threat for safety and security of its citizens. On 11 July 2011, 13 people were killed and about 60 injured in a massive blast at a munitions dump in Cyprus. On 13 September 2012 a series of explosions shook a military depot in the area of Knin, Croatia. On 5 June 2012, a series of explosions occurred in the ammunition site near Sliven, south eastern Bulgaria.

For this reason SEESAC has responded to the requests for assistance made by several governments in the South Eastern Europe region interested in upgrading their respective storage facilities and increasing security of stockpiles.

To date, SEESAC has assisted the reconstruction of “Taraš,” Montenegrin Ministry of Defence’s ammunition storage site in Danilovgrad, as well as the central weapons storage facility of the Croatian Ministry of Interior Murat. Currently, upgrades of three storage sites in Bosnia and Herzegovina are ongoing while several other sites in the region have been assessed.

These SEESAC activities are made possible by the European Union (EU), under the EU COUNCIL DECISION 2010/179/CFSP, dated 11 March 2010, in support of SEESAC arms control activities in the Western Balkans, in the framework of the EU Strategy to combat the illicit accumulation and trafficking of SALW and their ammunition.