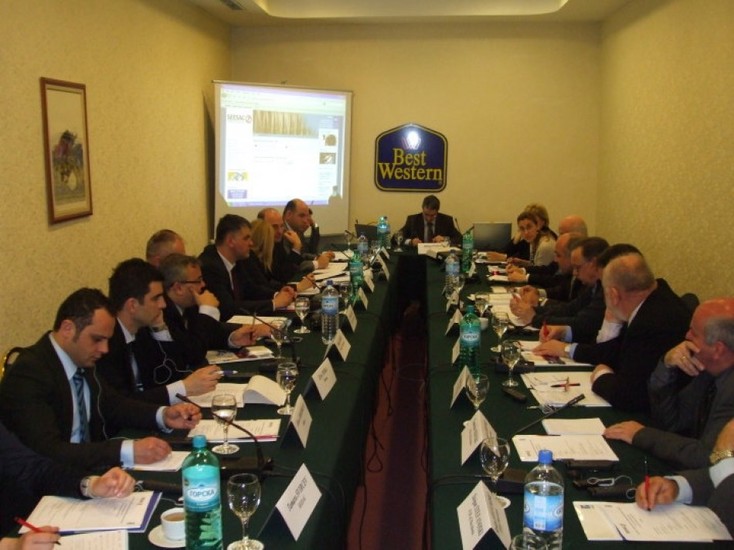 The second meeting of the Regional Information Exchange Process on Arms Export Controls took place on 23 March 2010 in Skopje, FYR of Macedonia, with the participation of delegations from Albania, Bosnia and Herzegovina (BiH), Croatia, the former Yugoslav Republic of Macedonia. Montenegro and Serbia.

The meeting began with the Bosnia and Herzegovina presentation which summarizes the priorities of that country as a non-permanent member of the UN Security Council in the period 2010-2011. It was agreed that they will continue to provide updates at the subsequent meetings.

Delegations reviewed and approved the regional database of licensing officers for foreign trade of armaments, military equipment and dual use goods which was developed and presented by SEESAC. It was agreed that SEESAC will update the data every six months.

The discussion was then focused on national export policies for exports of weapons and dual-use goods to specific geographic destinations. Each delegation informed the meeting participants about recent cases of arms exports.

Delegations exchanged views on the implementation of catch-all clauses as well as on the country-specific end-user and international certificates and forms. It was agreed that delegations will share sample forms and certificates at the next meeting.

SEESAC then presented a database of brokers registered in the Western Balkans. The database is still under development. Delegations decided the database should initially contain only contact details of the registered brokers, including when possible email and web addresses. SEESAC was tasked to continue collecting information and updating the database with the view of presenting the full version at the next meeting.

Finally, delegations agreed that the next meeting of the information exchange process will take place in November 2010 in Belgrade, Serbia. It was agreed that representatives of EU COARM will be invited to attend and present the work of COARM.

In addition to the proposed presentation by EU COARM representatives, the tentative agenda for the next meeting will include: