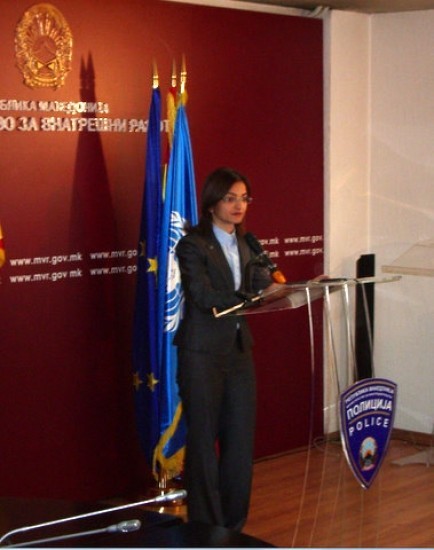 On 26 July 2011, an official ceremony was held at the Ministry of Interior in Skopje for the handover of a storage facility for safekeeping of ammunition cartridge cases. The upgrade of the storage facility was supported by the European Union (EU) under the EU Council Decision 2010/179/CFSP and implemented by UNDP/SEESAC. Minister of Interior, Gordana Jankuloska, received the donation on behalf of the authorities of the former Yugoslav Republic of Macedonia.  Minister-Counselor Dieter Thiel, head of Operations at the European Union Delegation in F.Y.R. Macedonia participated on behalf of the EU, while Ms. Deirdre Boyd, the UN Resident Coordinator and UNDP Resident Representative in the F.Y.R. Macedonia represented the UNDP.

Minister Jankuloska emphasized her country’s commitment to being an active member of the wider European family, and its continuous involvement in all processes aimed at prevention and eradication of illegal weapons, in accordance with the international initiatives, standards and documents on arms control, ammunition and explosive substances.  Furthermore, the Minister informed those present that the Office for Criminal Technique, apart from the newly equipped storage space for fired cartridges, has also received state of the art equipment for electronic recording of all data and their use in investigations and checks. Finally, the Minister noted that as a result of the cooperation with SEESAC and UNDP, authorities were also provided with the update for the existing weapons registration software following the amendments to the Law on Weapons.

Mr. Dieter Thiel, presented the new facility and equipment and said that the EU, being a promoter of peace and security in the Western Balkans, is continuously committed to supporting relevant regional initiatives aiming at reducing the risk posed to peace and security by the proliferation and excessive accumulation of SALW. This objective has been put forward by the EU Strategy to combat the illicit accumulation and trafficking of SALW and their ammunition in 2005. In his conclusion, Mr. Thiel expressed satisfaction with the tangible results of this particular project, which is aimed at developing and upgrading the existing systems for weapons identification, registration and recordkeeping at the Ministry of Interior.

Ms. Deirdre Boyd, the UN Resident Coordinator and UNDP Resident Representative, also attended the ceremony. Ms. Boyd highlighted the importance of SALW control and pointed out that marking and tracing of weapons is a responsibility of the Government in its fight against proliferation of SALW. She mentioned that the system that has been setup here was a model for the whole region and that UNDP and EU supported the Ministry of Interior in the realization of this project, which was a part of the global fight against illicit weapons proliferation.

On 11 March 2010, the EU, under the EU Council Decision 2010/179/CFSP, decided to support SEESAC arms control activities in the Western Balkans, as a way to implement the EU Strategy to combat the illicit accumulation and trafficking of Small Arms and Light Weapons (SALW) and their ammunition. The upgrade of the storage facility in Skopje is an integral part of the implementation of this Council Decision. Furthermore, the upgrades help bring the country closer to complying with the EU regulations on SALW record-keeping and storage.