The Regional Meeting of SALW Commissions held in Tirana 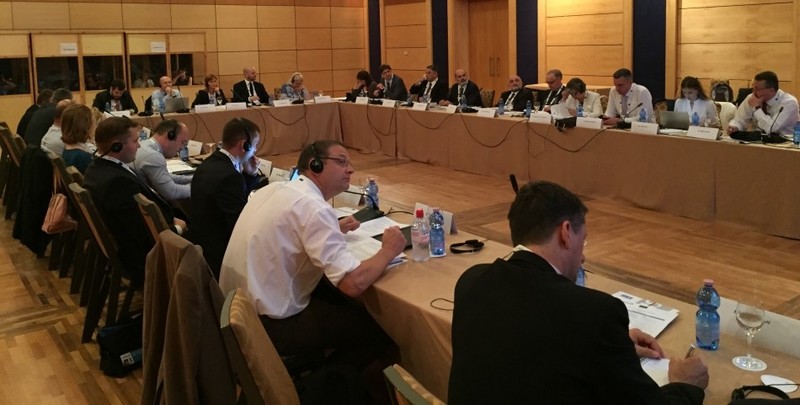 Albania’s Deputy Interior Minister Mr. Stefan Cipa emphasized “Albania’s commitment to all regional initiatives, which aim to not only exchange the rich expertise and knowledge that exists in the region, but also to reinforce the bonds and the bridges of cooperation among our institutions”.

The establishment and facilitation of this SALW Commissions has reinforced knowledge sharing and information exchange in this area, Mr. Rudolph from the EUD in Albania said at the opening adding that the EU is convinced that these mechanisms serve par excellence “to promote transfer of valuable technical expertise in the implementation of your SALW strategies as well in your efforts to comply with the main EU Directives and international treaties in this area”.

Ms. Stefana Greavu, RCC’s Head of the Political Department told the participants that the issue of SALW  in SEE represents a significant regional concern, adding that “the large scale availability of SALW continues to pose threat to security of the region, the safety of citizens, hindering development efforts and damaging the region's efforts to become an exporter of security”.

Participants provided updates on the status of implementation of the SALW Control Strategies, the revision processes of the SALW Control strategies ongoing by several SALW Commissions as well as lessons learnt and challenges faced during these processes. A session of the meeting was dedicated to collection and legalization campaigns, with Montenegro providing detailed information about the results of the campaign and lessons learnt regarding its methodology and approaches.

Head of SALW Control Projects for Arquebus Solutions Mr. Adrian Whiting, presented a study conducted in the region on how to link SALW registration systems in SEE and its advantages in combating illicit trafficking of firearms.

International framework in SALW Control was on the agenda during the second day of the meeting, with Ms. Jasmina Roskic Head of Serbia’s Division of Bilateral Investment Treaties, Concessions and Foreign Trade and Controlled Goods, presenting about reporting and inter-institutional coordination under the Arms Trade Treaty. Mr. Lapon provided updates on the recent amendments to the EU legislation on SALW Control and SEESAC Project Coordinator offered an update about Regional Arms Law Compendium developed by SEESAC.

Policy responses on preventing armed violence, benefits of use of open data in formulating effective and sustainable policies were discussed along with a presentation on how integrating gender perspective into SALW policies ensures that their effective implementation improves security for both men and women.

The two-day meeting was concluded with each SALW Commission presenting their current needs which require funding support in the area of arms control, related to marking, registration, tracing and stockpile security.

These regional meetings are an activity implemented under the EU Support of SEESAC Disarmament and Arms Control Activities in South East Europe (EUSAC) project, initiated through the Council Decision 2013/730/CFSP.

The EUSAC builds directly upon SEESAC’s decade-long SALW Control work, particularly achievements made through the previous EU funded SALW Control project, conducted during the 2010-2012 period under the Council Decision 2010/179/CFSP.  Designed in close cooperation with national authorities, the project works on the following five interrelated streams of activities: