Serbia: Industry Outreach Seminar on the Control of the Import and Export of Arms, Military Equipment and Dual-Use Goods 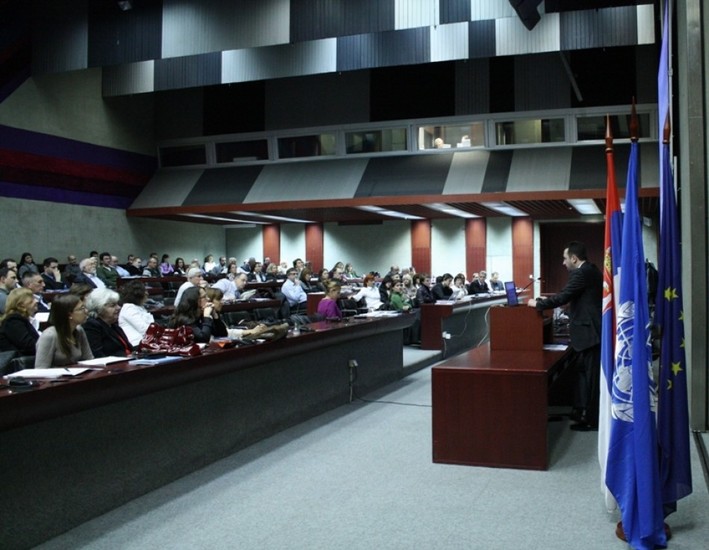 The industry outreach seminar on licensing procedures for the import and export of arms, military equipment and dual-use goods was held on 12th December 2011, in the \"Sava Centar\" in Belgrade. The workshop was hosted by the Ministry of Economy and Regional Development (MERR) of the Republic of Serbia, with the support of the SEESAC and Germany’s Federal Office of Economics and Export Control (BAFA), through the financial assistance provided by the Kingdom of Norway and the European Union respectively. BAFA is acting as the implementing agent of the EU cooperation programme in export control of dual-use goods mandated by the European Union.

The industry outreach seminar is an annual event that is envisioned as one in a series of opportunities for a frank and informative conversation between the government and industry representatives, leading towards their better cooperation and more efficient procedures.

More than 120 representatives of the Serbian industry who attended the seminar were welcomed by Ms. Jasmina Roskic, Head of the Department at the Ministry of Economy and Regional Development, Dr. Ivan Zverzhanovski, SEESAC Team Leader a.i., and Ms. Ivana Micic, EU Project manager for South East Europe and Long-Term Project Representative at SIPRI.

During the first session of the seminar, international experts introduced the Serbian industry to the best practices and valuable experiences of their European Union counterparts. Ms. Sandra Raca, an expert from BAFA spoke about the reasons behind and incentives for instituting effective export control. Ms. Iva Savic of SEESAC introduced the audience to the content of a publication entitled “Internal Compliance Programms (ICP)” – which explains the logic behind and basis of ICPs in the arms and dual-use goods industry, and compares and contrasts execution of these programs in various countries and companies. Ms. Elsa Astrom, a Swedish expert and a Legal Affairs and Integrity Country Export Control Administrator at ABB, spoke about best practices at ABB.

During the second part of the seminar, participants had the opportunity to hear from the representatives of the relevant agencies in charge of executing control of exports/imports of arms and dual-use goods in the Republic of Serbia. Ms. Jasmina Roskic reviewed the last year’s changes within the rules and regulations concerning export-import control of weapons, military equipment and dual-use goods. Mr. Dragan Milojevic of the Ministry of Foreign Affairs expanded on the application of international restrictive measures and impact of changed international circumstances on decision making process with regards to controlled goods export licensing. Mr. Dragan Marcetic from the Customs Administration of the Republic of Serbia explained in detail customs procedures for clearing controlled goods. Finally, Ms. Snezana Milic, also from the Ministry of Economy and Regional Development, spoke about the most precise ways of identifying controlled goods.

Each of the panels was followed by a lively discussion as the industry representatives had many pending questions, especially for the government representatives.

Assisting with the Industry Outreach is one in a series of Arms Export Control activities implemented by SEESAC and funded by the Ministry of Foreign Affairs of Norway.