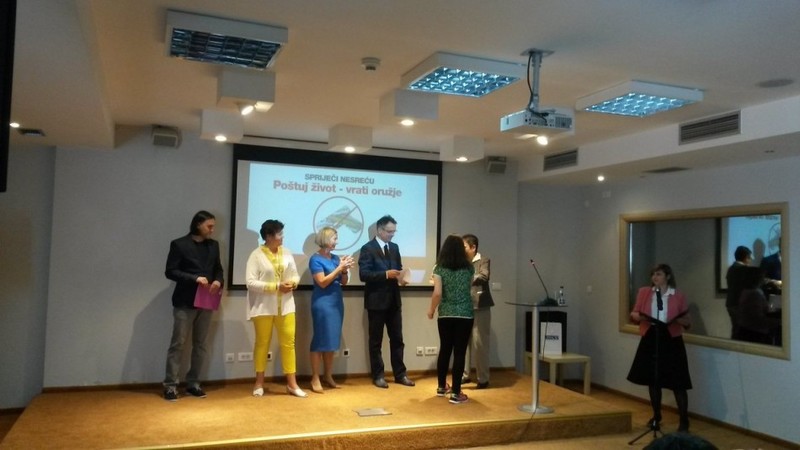 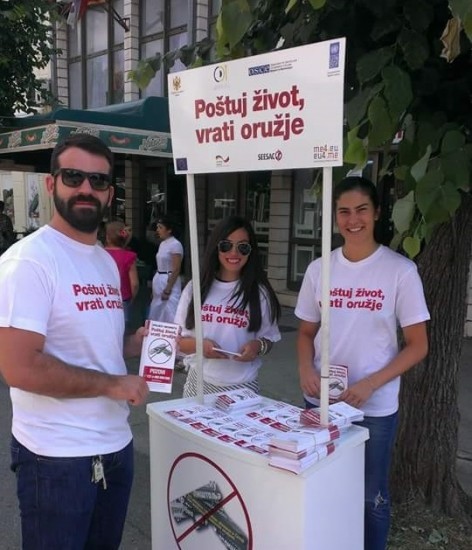 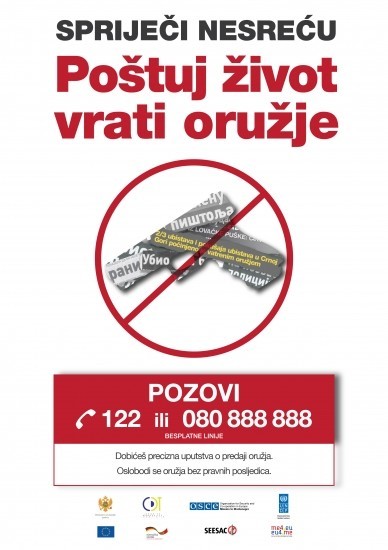 PODGORICA – Ministry of the Interior of Montenegro (MoI), together with SEESAC, UNDP Montenegro, the Organization for Security and Cooperation in Europe (OSCE) in Montenegro, and the Center for Democratic Transition (CDT), completed the  awareness raising campaign “Respect Life, Surrender Weapons” (Poštuj život, vrati oružje) on 14 June 2016.

Supported by the European Union (EU), with the funds secured through the EU Council Decision 2013/730/CFSP in support of SEESAC disarmament and arms control activities in South East Europe, the campaign aimed to promote legalization of small arms and light weapons (SALW), surrender of illicit SALW and to sensitize the public to the risk associated with firearms in the society.

In the past year, since 24 June 2015 when the campaign was launched, Montenegro collected 1079 weapons, 160 bombs, 623 parts of weapons and 15 266 bullets, while 387 weapons have been returned to the police by the citizens, Interior Minister Goran Danilovic told the media.

The Minister was joined by the UN Resident Coordinator and UNDP Resident Representative to Montenegro Fiona McCluney, the Head of the OSCE Mission to Montenegro Janina Hrebickova, the German Ambassador to Montenegro Gudrun Steinacker and representative of the civil society organization Center for Democratic Transition (CDT) Milica Kovacevic.

CDT worked together with the MoI in awareness raising and collections activities, including running a social media campaign and disseminating information in over 20 towns and municipalities, as well as accompanying police officers during the handover of illicit weapons by citizens.

The legalization period ended in March 2017, while amnesty for the surrender of illegally held weapons lasts for the duration of the law.  Montenegro’s Law on Weapons was passed on 27 February 2015, envisaging an immediate, two-year long legalization campaign.

ABOUT EUSAC
EUSAC builds directly upon SEESAC’s decade-long SALW Control work, particularly achievements made through the previous EU-funded SALW Control project, conducted during the 2010-2012 period under the Council Decision 2010/179/CFSP. The EUSAC project, designed in close cooperation with national authorities, works on the following five interrelated streams of activities: