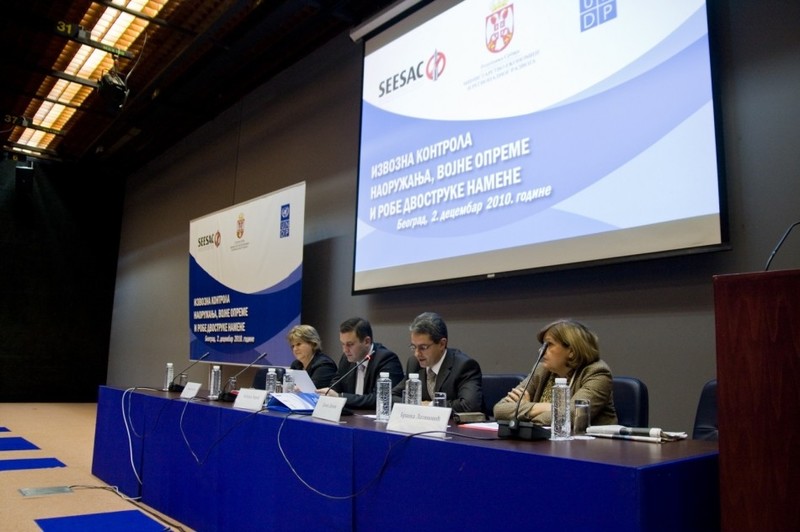 On 2 December 2010 in Belgrade, the Ministry of Economy and Regional Development (MERD) of the Republic of Serbia and SEESAC jointly organized an industry outreach seminar. The seminar centred on the theme of exports control of arms, military equipment and dual-use goods. The seminar was attended by approximately 200 representatives of companies, licensed to engage in trade in controlled goods, and representatives of the national institutions that are responsible for the oversight of exports control. The aim was to provide a platform for increasing the communication and cooperation in the implementation of export controls in Serbia between government and industry.

In his opening speech, Mr. Nebojsa Ciric, State Secretary for the Economy and Privatization in MERD, stated that controlled goods were Serbia’s largest export and stressed the importance of the system of export controls. He urged the industry to use the seminar as much as possible to engage representatives of government institutions and to clarify any issues they have with current administrative procedures for export licences. Welcoming participants, Mr. Diman Dimov SEESAC Team Leader, commended Serbia on the progress it has made in the transparency of its arms export control system.

During the first session Ms. Jasmina Roskic (MERD) and Ms. Branka Latinovic (Ministry of Foreign Affairs) gave an overview of the legal framework and procedures in the field of export of arms and military equipment in the Republic of Serbia.  Ms. Latinovic provided an update of the international legal standards and obligations in the area of export control, while Ms. Roskic spoke about the control system regarding the import and exports of arms, military equipment and dual-use goods.  Mr. Milan Vasovic (Ministry of Interior) presented the procedures in the field of transportation of arms and military equipment, while Ms. Vesna Vracar (Customs Administration) gave an overview on the role of customs in the arms exports and import control system.

Ms. Snezana Milic (MERD) presented the Annual Report on the Transfers of Controlled Goods in 2008 during the second session and stressed upon the importance of reporting as an obligation by the industries in Serbia. She highlighted the fact that the value of export licenses has grown significantly in 2008 and that Serbia emerged as the regional leader when it comes to arms exports.  The third and final session was dedicated to the programme of internal controls within companies, where Mr. Miroslav Coric from SIEMENS gave a presentation.

Presentations were followed by a question and answer session where MERD officials discussed relevant issues with the industry representatives.

The Agenda of the seminar can be downloaded here.