Why do we need a Disaster Loss Database? An answer comes from Serbia 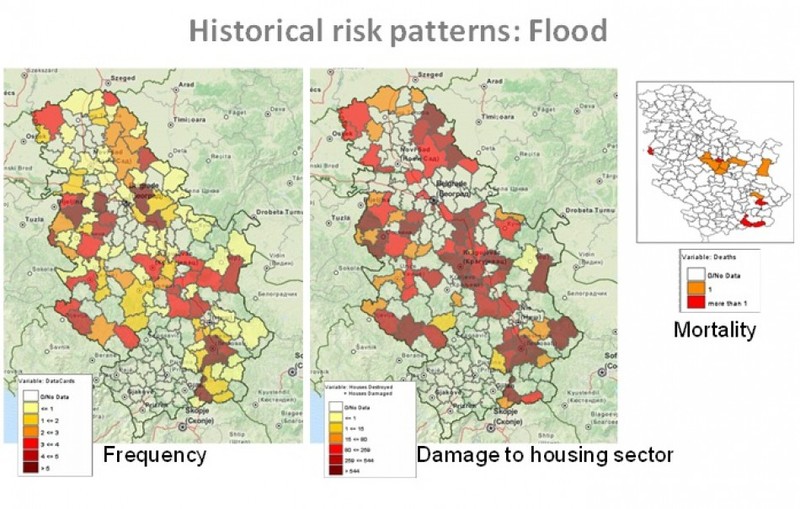 “We cannot eliminate disasters, but we can mitigate risk. We can reduce damage and we can save more lives”

Every dollar (1$) invested into disaster prevention, saves seven dollars (7$) used to restore life in the disaster’s aftermath. But to know where to invest, one needs information on where a disaster could occur.

Although no two disasters are alike, attention should be paid to recurrence. That is why we need a tool that provides us with a better understanding of the disaster trends and their impacts based on which informed prevention, mitigation and preparedness measures can be planned.

DesInventar is one of the very few proven tools for building such a database and the United Nations Office for Disaster Risk Reduction (UNISDR), the United Nations Development Programme (UNDP) and the Sector for Emergency Management (SEM) of the Ministry on Interior of the Republic of Serbia are piloting it right here in Serbia!

DesInventar permits standardized collection, analysis and graphic representation of the information on disaster occurrences and losses they produce.

Serbia is one of only five countries in Europe piloting the database and our work on it began in February of this year (2013).

After six months of the project duration and two months of extensive research, the project research team managed to collect information on 1,485 disaster events that took place in Serbia during the 27-year period from 1986 to the present. The data provided by Sector for Emergency Management and Red Cross of Serbia for the period 2009 – 2013 is very detailed, while only major and critical events are covered for the period 1986 -2009 reported on by other institutions.

By all accounts, the amount and quality of data collected is more than impressive and represents not only a great start for the database in Serbia but also a great success at a global level. And we even advanced the gender in DRR agenda – for the first time, Serbia has gender disaggregated data and from now on, all data will be collected in a gender sensitive way!

We believed that creating such a database is important for Serbia because it makes official data publicly available, easily searchable and its results can metrically and visually demonstrate risk patterns in Serbia.

The database serves the general public, local municipalities, academia and all parties interested in exploring the disaster risk patterns in more depth. It provides critical insight into the relationship between risk and development, and legitimizes demands for greater accountability by the responsible institutions.

We ventured into the project armed with various myths having to do with administration’s record keeping capacities and institutional memory – particularly for the pre- 2000 period.  Today, more than 6 months after we started the project, we can - from our own experience - say that parts of the Serbian administration are keeping thorough records of a number of parameters necessary for a diligent and systematic analysis of the Disaster Risk Reduction (DRR) situation.

For instance, outstanding contributions were provided by the Red Cross of Serbia, the Ministry of Agriculture, Forestry and Water Management, the public utility Company “Srbijavode,” and the Ministry of Natural Resources, Mining and Spatial Planning.

The methodology Serbian institutions are using is comprehensive, but it should be updated in order for the data collected to be more precise and disaggregated.

Generally speaking, with respect to the information flow, there are several disconnects within Serbia’s DRR system, where not all institutions are providing/exchanging data nor feeding all of the available data to one address – the Sector for Emergency Management.

It is also important to note the ease with which the Statistical Office of the Republic of Serbia planed and implemented the preparation of methodology and execution of data collection demonstrates the professionalism, strong in-house knowledge and expertise for which they are sometimes not adequately recognized and praised.

Overall, the experience and the results achieved through this project are very encouraging and provide a very positive outlook for the Serbian government and its institutions.  First and foremost, the amount of data managed by the Sector for Emergency Management is rather impressive. Furthermore, as this institution, which was established in 2010, grows and develops in the future, the body of information and knowledge it manages will grow and will be used more frequently to shape the policies, finances and management decisions governing the DRR area.

On our part, we look forward to further supporting the disaster risk reduction systems and polices in Serbia and are keen to share the DESINVENTAR experience further afield.