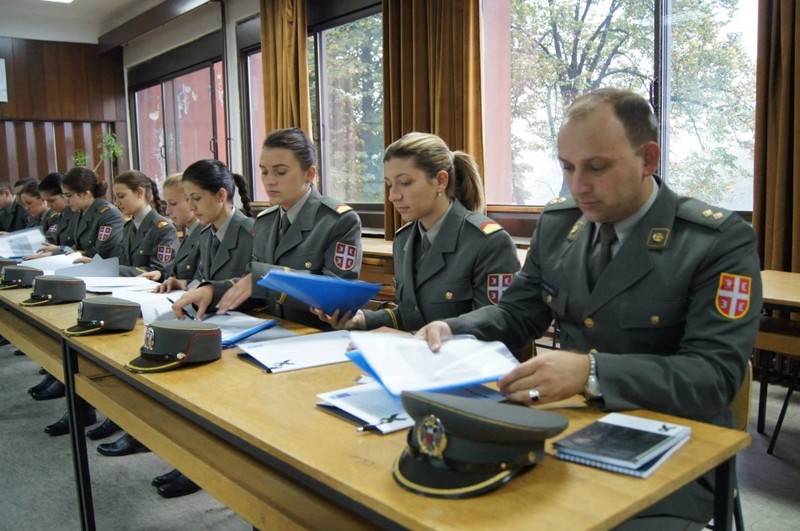 November was a busy month for the SEESAC Team. The tempo of our work on advancing gender equality in the defence systems of four countries in South East Europe has increased. We implemented parallel activities in Bosnia and Herzegovina, FYR Macedonia, Montenegro and Serbia all with a view of improving recruitment and retention of women in the armed forces.

We are particularly happy that we were given access to the Serbian Military Academy cadets and the opportunity to raise their awareness of gender through workshops. These were highly rated by the future officers – they even asked for more such trainings and suggested that their commanding staff should also be trained. And we plan to do that next year!

In Montenegro, we worked together with the Ministry of Defence Gender Advisor to raise awareness among uniformed personnel on gender equality and sexual and gender based violence. The workshop we jointly organized was attended by some of the most senior military personnel – and most of them male!

Developing the ability to successfully advocate for gender equality is at the core of the the Gender Equality in the Military project. Therefore, SEESAC partnered with DCAF to deliver a two-day training in order to further strengthen the network of gender equality advocates within the Armed Forces in the Western Balkans. Participants from Bosnia and Herzegovina, Montenegro, Serbia and the former Yugoslav Republic of Macedonia gathered in Belgrade on 26-27 November 2013 to enhance their knowledge on gender equality and strengthen their advocacy skills all with the view to advance gender equality in the military. The workshop, based on interactive sessions, allowed participants to learn about the phases of the advocacy circle, how to identify relevant issues, map stakeholders, develop and deliver advocacy messages. A follow-up workshop is planned for the spring of 2014.

An essential aspect is the capacity to process and analyze gender disaggregated statistical data on personnel in order to inform the development of gender sensitive human resource polices. With this in view, SEESAC acquired and donated to the Ministry of Defence of the former Yugoslav Republic of Macedonia SPSS, the most widely used suite of statistical software package, used for data collection, data preparation and management, reporting, presentation and distribution. In addition, we delivered a two day-training tailored specifically for the needs of human resources department personnel of the MoD and ARM, eight (8) of whom attended.

We still have a lot of work ahead of us, but we are making serious strides in ensuring that defence policy is taking a gendered perspective and that we support efforts to improve the ability to implement UNSCR 1325 on the ground!