Gun destruction – why it matters 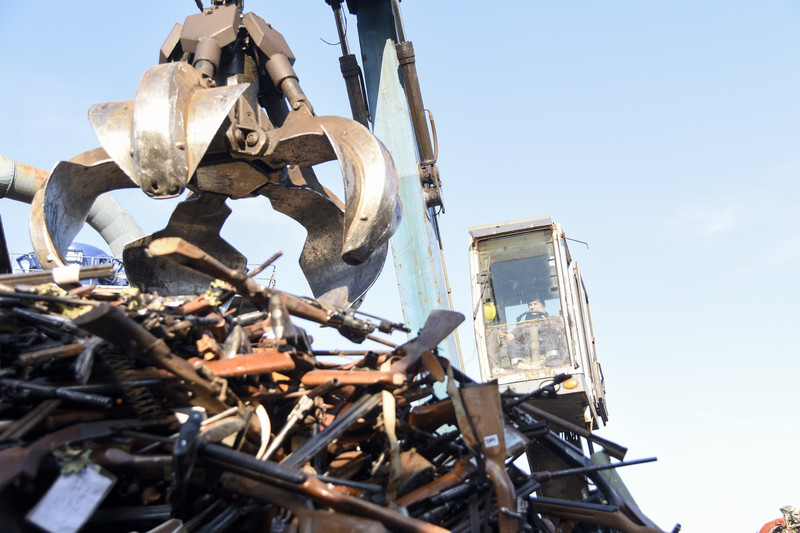 When you work in a security-related field seeing illegal weapons that can end a life or cause debilitating injury being tossed aside and cut to pieces is a textbook example of a beautiful sight. Serbia recently disposed of 18,009 guns at a recycling center. I was there to watch a huge claw drop thousands of weapons into an industrial grinder that cuts guns up and spits out small pieces of scrap metal. The recycling center usually processes abandoned cars and other metal material, but this was an opportunity to recycle a very different type of waste. In terms of visual appeal in security matters, destruction of previously illegally owned guns wins the Oscar every time, but how does it make us more secure?

Destroyed guns do not cross borders

The road to increasing a country’s security is paved with destroyed illegal guns. Only complete destruction can ensure that a gun will never be misused again. A firearm that has been shredded or melted down will never be stolen or trafficked. Gun traffickers can’t reassemble scrap metal into a functioning firearm. Destruction thwarts the creative minds out there who can easily restore perfect functionality to deactivated firearms. In short, the only way to get a 100% certified guarantee that a gun will never be used again is to destroy it.

Destruction also answers a tricky question for many authorities in South East Europe, what do you do when you have so many weapons that you cannot store them adequately or safely? Destruction reduces the numbers of old, obsolete and unneeded small arms and ammunition held in storage. Many firearms and ammunition in South East Europe are stored in aging facilities, which can lead to damage, theft and, in the worst-case scenario, unplanned explosions. Eliminating surplus weapons and ammunition reduces the burden on authorities to store these dangerous items.

The other type of headline

Usually guns only make the headlines when someone is killed or injured, but having thousands of guns destroyed also gets a lot of media attention. Both of these kinds of headlines remind people that there are strings attached to owning a gun. But, of the two options, the destruction of guns is undoubtedly the preferable reminder to people that guns being trafficked and misused is not yesterday’s news.

On top of all of the above, witnessing the sight that I did in Serbia serves as a reminder of why we work to stop illegal guns from being used, why we destroy unneeded guns and their ammunition, why we tell people about the dangers of weapons. We do all this so that, at the end of day, fewer people are harmed by firearms.

At SEESAC, we work daily with governments to make security in South East Europe picture-perfect.