Fighting for Gender Equality on the Battlefield 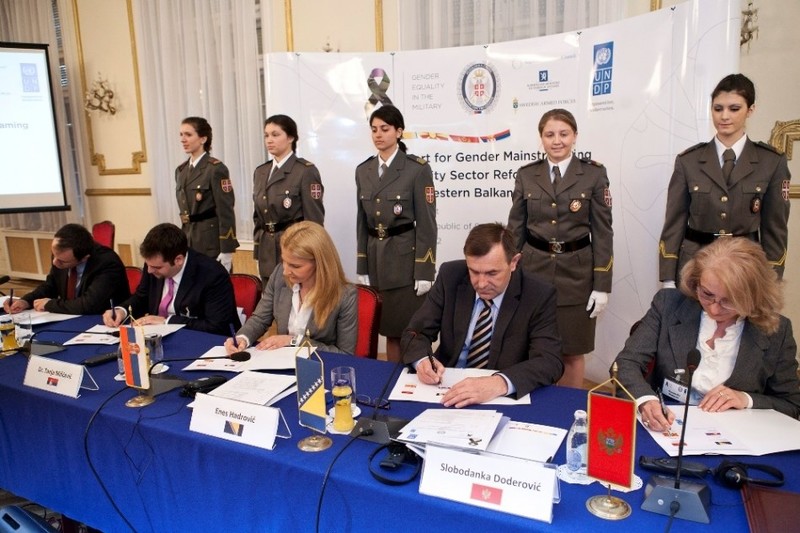 March 22 was an exciting day for me.  For the first time in my life, I was seated in the Central Army Hall in Belgrade, shoulder to shoulder (well, almost) with Generals, Colonels and Lieutenants from a number of countries in the region.  Military attachés from various embassies based in Belgrade were also among those seated around me.

I was attending the opening event of UNDP’s new project that aims to support gender equality in the military in the Western Balkans. I was impressed with the professionalism of the women and men behind the launch of the new – and necessary – initiative.

I was struck by what one participant said:

“The character of war has changed in time….the way we fight wars today has changed.”

It reminded me of an article in the New York Times, which argues that the military and the nature of war have changed. It also quotes surveys and studies, which concluded that the rules keeping women off the battlefield are nonsensical and obsolete. A claim that women might prove physically or mentally unfit for combat is totally unfounded. More than anything, such a claim is an insult to the women in the military who are true professionals. And yet, countries across the globe are applying restrictions to women’s recruitment to the military.

In her blog (See: Wanted: Women in top military roles), Paula Broadwell quotes a Pentagon study, which concluded that “research evidence has not shown that women lack the physical ability to perform in combat roles or that gender integration has a negative effect on unit cohesion or other readiness factors.”

Changes are happening, but the pace is slow. For instance, it was only December 2011 when the Ministry of Defence in the UK announced that women would soon be allowed to serve on board Royal Navy submarines. I can only emphasize Paula Broadwell’s comment: “Most of us do not understand why, if we have proved ourselves physically, mentally, and tactically capable of leading on the front lines, that we’d not be qualified for certain opportunities.”

Without making the work environment conducive for equal participation, institutions and societies are unjustly claiming that women cannot do the job properly. Accordingly, I am not surprised if not many women are getting enthusiastic about joining the military. Why should anyone eagerly choose a profession likely to treat them with insult and prevents them from getting promoted? And of course there is the macho image of the military which is a huge deterrent. I cannot agree more with the sentiment expressed by Brigadier Nicky Moffat, the highest ranking woman in the British army:

“This isn’t helped by the fact that society trots out pink Barbie dolls for women, and action men with rifles for men.”

The ultimate highlight of the day for me was meeting the Chief of the NATO Office on Gender Perspectives. It is not everyday that I meet a Lieutenant Colonel from NATO. And amazingly, her job description sounded very much like mine – in that I mean we both strive to integrate gender perspectives in our own institutions.

My job is breaking and transforming gender stereotypes. The macho image of the military used to represent the ultimate challenge. However, having participated in the UNDP project launch event in Belgrade, and having listened to the voices of female military professionals, I feel that I can relate to the military. Discrimination and disadvantages that women face in the military are similar to those that women face in other sectors such as the public administration, or private firms (See: our infographics).

I left the Central Army Hall feeling somewhat encouraged. True, our “war” against gender inequality continues to be a tough one, but there are women and men fighting for gender equality in every corner of our society – including in the military.