Constructive Destructions – Or, that time I philosophized over a manhole cover 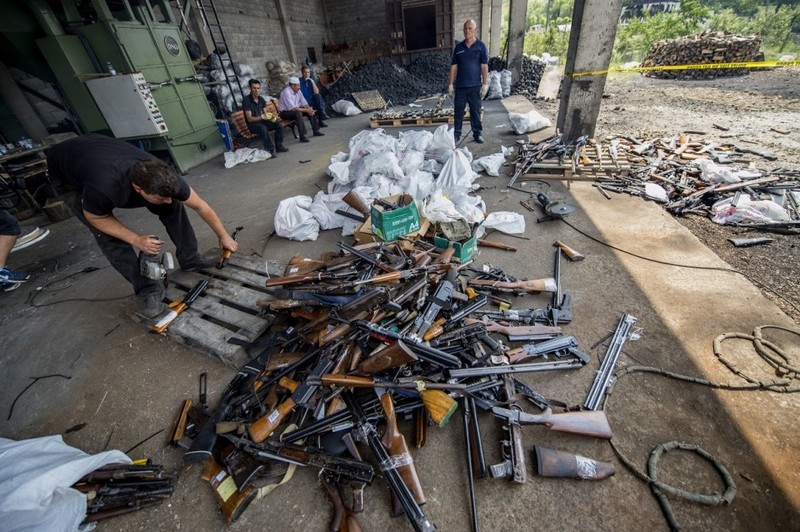 
Sparks are flying. A distinct smell fills the air. Twisted metal, slowly metamorphosing into liquid. Wheelbarrows of marked guns, the ID tags on them shivering slightly as the wheelbarrow plods over a small bump or a pebble in the dirt ground. Electric saws cut the rifles into manageable pieces. Mixed with other types of firearms, the heap of metal is weighed and then, under the watchful eyes of police officers, metal workers, and other observers, transported into a furnace, ceasing to exist as we know them – threatening, powerful, lethal.

I’m at a gun destruction event somewhere in the Western Balkans. On the outskirts of a small industrial cluster surrounded by flat fields, a tiny fairly bland-looking metal factory separates itself from its equally aesthetically uninspiring workshop neighbours by exuding a distinct yellow-greenish smoke. This is the location for the melting of 1,300 weapons.

South East Europe, marred by conflicts – both ancient and recent, a prolific gun culture, as well as porous borders, still faces a stark reality of widely available small arms. So 1,300 guns are a drop in the barrel, yet every piece counts. Draining the ocean one drop at a time.

The weapons had melted into liquid, and workers carried buckets filled with the molten lava-looking substance, pouring it into molds in the factory floor. Destroyed weapons are turned into a variety of metal tools that can be re-used in society; and these particular guns were to start new lives as manhole covers.

As I stood on the workshop floors, watching the covers settle into shape, I pondered what damage they had done in their previous existence.

The destabilizing effect of guns very much lies in their lethality. Although the impact of small arms and light weapons on conflicts has been well-documented, uncontrolled firearm proliferation has a significant effect on peacetime societies. A bullet doesn’t know if it’s being propelled accidentally or on purpose, in battle or in peace, it does the same damage to the person it embeds itself in, regardless. Domestic violence, for example, is much more likely to result in homicide when there’s a gun in the home – especially coupled with previous instances of abuse.

Bearing this in mind, it is interesting to note gender-disaggregated data on men and women in incidents involving firearms. Based on information on the misuse of firearms from media and concerned citizens in Serbia collected through the SEESAC-established Oruzje na Meti (Targeting Weapons) platform, men make up the majority of both perpetrators and victims, but women are much more vulnerable to gun violence inside the home.

And this goes back to what I was saying about the significance in every piece destroyed. One gun less on the streets is one less instance of bloodshed resulting from domestic violence, criminal dealings, celebratory gunfire, or property disputes, to name a few.

Thursday last week, 9 July, was International Gun Destruction Day and SEESAC coordinated parallel destruction events in Montenegro and Kosovo*, sending a message from the region to raise awareness about the threat to safety posed by excess, poorly secured, and illegal guns – both within South East Europe and abroad – remembering those affected by gun violence and working to avoid similar travesties in the future. Somewhere in a mundane industrial park in a field, there’s a workshop exuding yellow-green smoke, where hazard is being turned into infrastructure.

SEESAC, with the generous support of the EU, works to help partners in the region as they combat the proliferation of small arms and light weapons (SALW). By offering support in improving stockpile security, developing more steadfast legislation, facilitating cross-border cooperation, coordinating awareness and collection campaigns, as well as destroying firearms, the region is slowly but steadily becoming safer for its citizens.