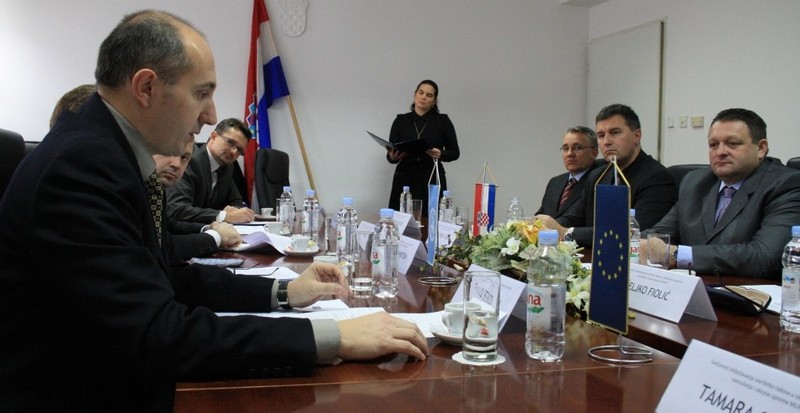 On 22 November 2011, representatives of the Croatian Ministry of Interior (MoI), EU Delegation to the Republic of Croatia, UNDP in Croatia and SEESAC met to mark the finalization of the major security and infrastructure works in MURAT. MURAT is the Croatian Ministry of Interior’s Central Weapons Storage, upgraded as a part of the SEESAC led and EU funded activity aimed at improving the control of arms and their ammunitions in Croatia.

Among the present were Drazen Vitez, Deputy Police Director, Louisa Vinton, UN Resident Coordinator in Croatia, Paolo Berizzi, Head of Political, Economic, Trade and Press & Information Section at the EU Delegation to the Republic of Croatia, and Zeljko Fiolic, Director of Department for Development, Equipment and Support at the Police Directorate.

The upgrade of the facility included establishment of a center for technical supervision; installation and integration of 30 surveillance cameras; introduction of an access control system – controlling the sliding door at the entrance to the complex; and installation of special alarms.

The upgrade was financed by the European Union (EU), which provided the funds under the EU COUNCIL DECISION 2010/179/CFSP, dated 11 March 2010, to support SEESAC arms control activities in the Western Balkans in the framework of the EU Strategy to combat the illicit accumulation and trafficking of SALW and their ammunition.

On behalf of UNDP and SEESAC, Louisa Vinton thanked the EU and Croatian Ministry of Interior on their support and collaboration and congratulated all present on completing the project a month ahead of schedule.

Mr. Vitez and Mr. Fiolic, thanked the EU, UNDP and SEESAC on assisting the MoI with securing the central weapons storage “MURAT” as well as for their support in various other activities including SALW collection and destruction campaigns, personnel trainings, provision of equipment, etc. The representatives of the MoI announced that a strategy for the control of arms is currently being developed by the government of Croatia and will include plans for further storage improvements, personnel training and marking and tracing of weapons. It is in these areas they hope to continue collaboration with the international counterparts.

Mr. Berizzi reminded the Croatian delegation that they will soon, when Croatia enters the EU, find themselves on the donor side, funding arms control activities in the region and that way contributing to the long-term security in the western Balkans. In the meantime, EU Delegation is interested in continuing its support of arms control activities in the Republic of Croatia, particularly those whose goal is to stifle trafficking or arms through marking and tracing of weapons.

Krunoslav Seiwerth, Head of the Sector for Technical Support presented a detailed overview of the works done on the MURAT facility, noting that they were substantial and of essence for the security of the weapons and ammunition.