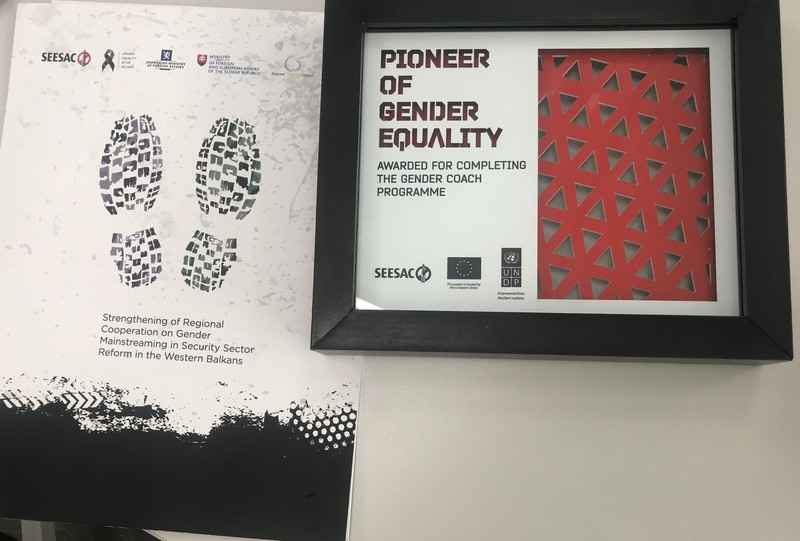 In close cooperation with the Ministry of Defence of Montenegro (MoD), UNDP SEESAC launched the Gender Coach Programme, an innovative approach that enables participants to become leaders in integrating gender into their operations and encourage change in their institution.

The Programme relies on the results of a similar Programme launched in the Swedish Armed Forces in 2007.  It is implemented through regular meetings and consultations between the Gender Coach and the high-ranking officer to address specific gender-related topics, which are agreed in advance with the aim of raising gender awareness and providing practical advice how to mainstream gender into policy development and in the everyday job of the high-ranking officer.

This Programme was successfully implemented in 2016 in cooperation with the Ministry of Interior of BiH and the Ministry of Defence of Montenegro. The results showed that officers who participated in the Programme played an invaluable role in advancing gender equality within their institutions through capacity development, rapport building, as well and increased knowledge and awareness.

The Strengthening of Regional Cooperation on Gender Mainstreaming in Security Sector Reform in the Western Balkans project is financed by the Governments of Norway and the Slovak Republic. With the support of UNDP SEESAC, the project provides the Ministries of Defence and the Armed Forces in the Western Balkans with a platform where, over the next three years, they can exchange ideas and develop policies to ensure long-term and sustainable inclusion of the gender perspective in defence policies and practices.