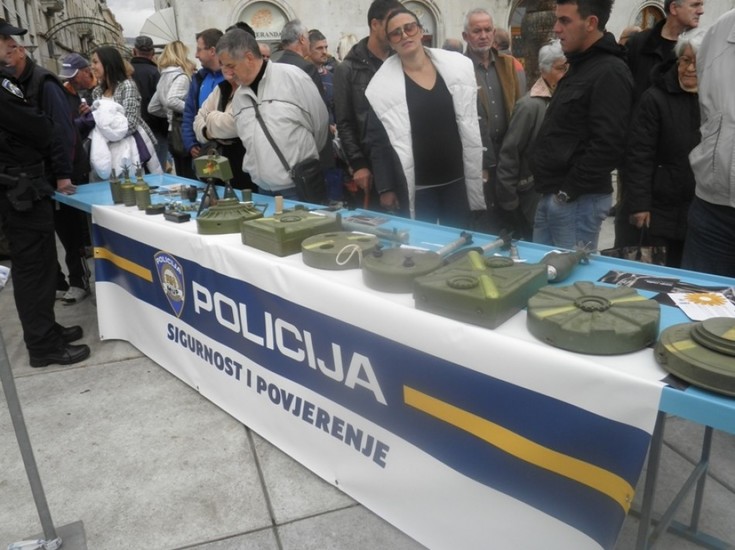 On 9 December, the final event of the ‘Less Arms, Less Tragedies’ campaign, which started four years ago in Split and has visited all Croatian cities since, took place. Ongoing since 2007, the campaign has been a nationwide effort to prevent firearm-related tragedies by informing citizens about the real dangers of owning a weapon, and encouraging citizens to surrender illegal weapons to the police, without fearing legal consequences. The last phase of this effort by the Croatian Ministry of Interior (MoI) has been financed by the European Union through SEESAC and with the support of the UNDP Croatia.

On 11 March 2010, the European Union (EU), under the EU COUNCIL DECISION 2010/179/CFSP, decided to support SEESAC arms control activities in the Western Balkans, as a way to implement the EU Strategy to combat the illicit accumulation and trafficking of Small Arms and Light Weapons (SALW) and their ammunition. SEESAC’s current campaign to collect weapons, explosive devices, and associated ammunition in towns across Croatia is one such activity supported by the EU.

In addition to various festivities, at the event, members of the Croatian MoI demonstrated to the interested audience how an anti-explosives robot works as well as benefits of having search dogs. Throughout the campaign the Ministry of Interior has set up information and collection stands and organized various awareness raising events. During 2010, the campaign took place in ten Croatia towns: Makarska, Delnice, Koprivnica, Krizevci, Pula, Kutina, Zagreb, Osijek, Karlovacka county, and Pazin. During this time, the police reportedly collected 149 automatic and 5,420 explosive illegal weapons, 274 legal weapons, 138,898 bullets and 106 kg of explosives.

Present at the the final event were Vitalie Vremis, UNDP’s Deputy Resident Represntative in Croatia, and Ivo Laborovic, Deputy Head of the Splitsko-Dalmatinska Country Police of Administration. "Today Croatia is safer and has a more promising future. Unfortunately, illegal weapons and explosive ordinances are still being kept in homes and still present a danger to the lives of Croatia’s citizens, particularly children.” said Mr. Vremis on this occasion. “I am sure that a strong Croatia, at the heart of Europe, has no need for illegal weapons and explosive ordinances, which is why we are inviting everyone today to support this campaign and ensure that the tragedies of the past do not become the tragedies of tomorrow,” Mr. Vremis continued. Mr. Labrovic stated that “although today’s event is the final event of the campaign supported by the European Union, we hope that the campaign ‘Less Arms, Less Tragedies’ implemented by the MoI, will continue in the future with support of the UNDP.”