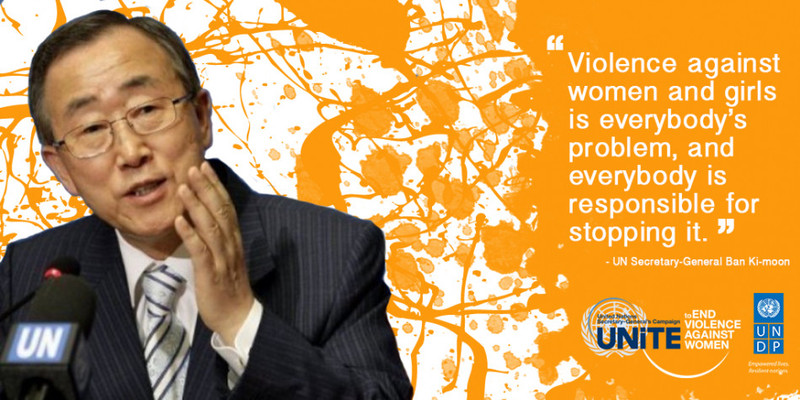 25 November is the International End Violence Against Women Day. This day also markes the start of an annual 16-day campaign of Activism Against Gender-Based Violence, which comes to a close on 10 December – International Human Rights Day.

Gender-based violence is violence – physical, sexual, and/or psychological – that is directed against a person based on gender. It can take different forms, but is most commonly perpetrated by men against women – demonstrating the persisting inequalities between women and men, and the consequent discrimination against women and girls.

Helen Clark, UNDP Administrator, noted that the toll of gender-based violence on women’s health surpasses that of traffic accidents and malaria, combined. She went on to point out that:

So what difference do you make by turning your Facebook profile picture orange? Not much, but it’s a start, a way to join the conversation and take action.

In order to combat discrimination, we need to change norms. We need to create institutions that have a proactive approach in fostering equality and respect in order to build a better society, but change starts at home.

We need to scrutinize ourselves – are we continuing or combating gender norms by our own behavior and mindset?

For example, the Gender Equality Expert at UNDP Serbia, Vesna Jaric, wrote about service providers in a Serbian city that had raised issues of facing challenges in empathizing with violence survivors that didn’t fit their idea of what a ‘victim’ looked like, “survivors who do not have visible bruises, do not seem depressed, are emotionally flat, or seem too angry, do not have low socio-economic status, are well dressed, are perpetrators of criminal offences such as robbery theft, etc”.

Violence against women is prevalent, and it doesn’t always take the shape or form we would expect it to. Bruises are not always visible and scars rarely run merely skin-deep. While we should aim to be proactive in our approach, targeting mechanisms that allow violence to flourish, we need to also be reactive, creating a safe space for survivors to come forward.

And when they do, offer them nothing but the utmost respect for their courage in doing so.

Whether or not we turn our Facebook profiles orange, women will be subjected to violence – physical, sexual, and psychological – to a much, much larger extent than men. The violence may manifest itself differently depending on the geographic, cultural, or socio-economic context, but it’s there. Women are continually diminished, continually told they are not the ones in control of their own bodies, continually treated as others’ property. Continually disempowered.

And while we might not be able to change that overnight, we can ensure we don’t contribute to it by vowing to speak up for those who are unable to.